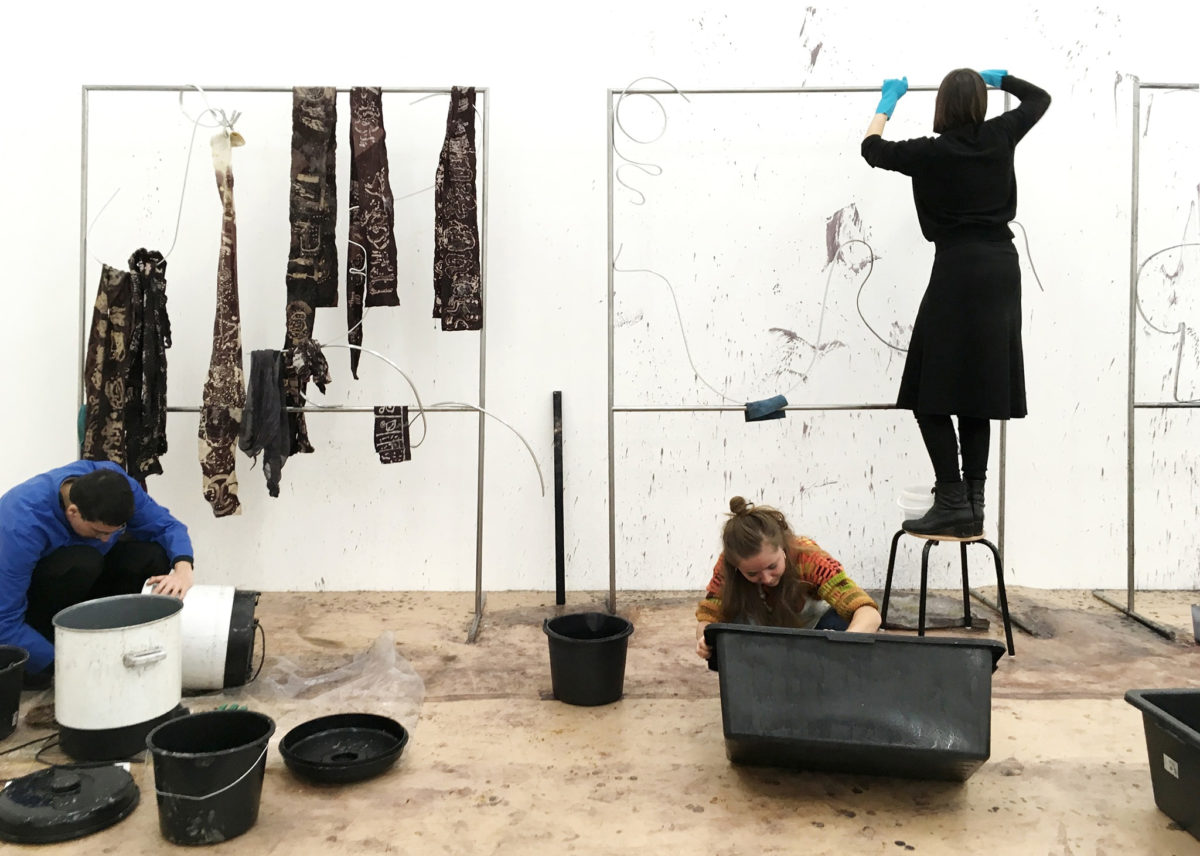 ATTENTION! All activities are postponed from 13.03 onwards.

Friday, March 6, 20:00
opening and introduction by the artists

On view in Kunsthal Gent on Saturday and Sunday until 22 March, 11:00-18:00.
Activation sessions in presence of the artists: Saturday 7 & 14 March
Finnissage: Sunday 22 March

Manoeuvre is an art center for craft, co-creation and diversity in the Rabot in Ghent. Since 2017 Manoeuvre has been working with Ada Van Hoorebeke, Maartje Fliervoet and participants on the project Fake Calligraphy, a sculpture that can be activated, inspired by Batik Besurek, a traditional calligraphic batik pattern from Bengkulu (Indonesia). Previous activations of the sculpture took place at Wiels in Brussels.

Batik Besurek was originally designed by Indonesian Muslims and is derived from Arabic script, but the characters are not always legible. With the unreadable calligraphic batik patterns in mind, the artists developed a sculpture in which notations of a language without literal meaning are central.

Fake Calligraphy is not a literal continuation of the Batik Besurek. From their backgrounds in various language systems, participants collaborate on language drawing patterns without literal meaning. Their activities thus form a means of communication so that Fake Calligraphy can be a platform for the exchange of speech, body language, technique and cultural knowledge. Different stages of batik production are covered - such as design, wax painting on textiles and dyeing with natural dyes. In addition, writing is done with iron gall ink and the folding of metal curls.

In the weekends of 7/8 March, 14/15 March and 21/22 March, Fake Calligraphy in Kunsthal Gent will be activated by manoeuvre, various participants and the artists.

You are kindly invited to participate in the design phases, such as: writing with iron gall ink, batik of false calligraphy and the folding of a metal curls in fake writing.

Participation is free and takes about 15-45 min. per participation.
Please register for participation at: nathalie@manoeuvre.org before 5 March
If desired, your name can be added to a list of participants.