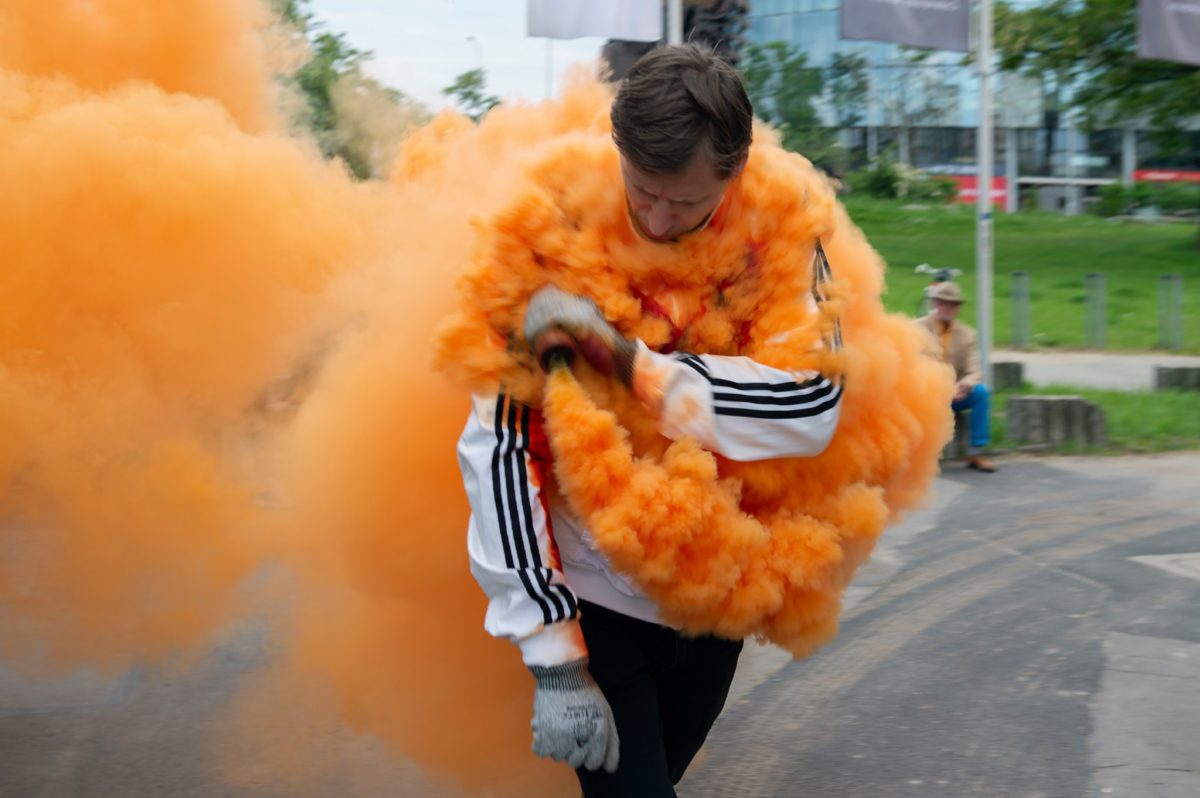 
Ester Schelfout: Brides in white satin
- Performance
Placed on the retelling of women's stories from (art) history, Schelfhout will work with the architectural elements of Kunsthal and continue to build on the story of the Caryatids, among others in Erechtheion, Akropolis: 6 young, handsome and fertile women, as slave girl could be bought. A weight that is literally and figuratively, a tough last.

Marcin Dudek: The Crowd Man
- Performance
Dudek touches questions about control in society, the hierarchy of power and mechanisms of violence and aggression, from sociological, historical and psychological points of view.
In his performances and performances, Dudek returns to the time when he was actively involved as a football fan / hooligan of football club Cracovia Kraków. In the late 1990s and early 2000s, the socio-political transformation in Poland was still underway with great "lawlessness." Conflicts between football hooligans were undoubtedly linked to the toe appropriation of public space by these groups.

Saddie Choua: THE CHOUAS # EPISODE 5 Am I the only one like me? - Film screening
Saddie Choua shows # 5 of her philosophical soap The Chouas, a representation of how the position of the immigrant artist and the image of immigrant artists (also within the art world) is sharpened. What is the place of the other in the hierarchy of power? Saddie Choua breaks through discriminatory practices in our society and awakens the viewer's critical mind by confronting him with his own stereotypes and questioning his attachment to domination systems.

--
croxhapox in Kunsthal Gent
As the first resident at Kunsthal Gent, the new artistic team of croxhapox examined the parameters for its future operation. During the Opening of Kunsthal, croxhapox presented 'schuivende grond - ruimtes van tonen': proposals and representations of how croxhapox, as a nomadic artists' initiative, wants to explore new spaces and new ways of showing in the future, in particular the creation of spaces of showing that arise through encounters and confrontations with both social and physical worlds that are also located outside of the usual art places.

The Third Landscape (Aug-Dec 2019), constructed as a forum for the exchange of art practices, to which the margin, the unused and / or unusable landscape is a metaphor for the current art landscape. Within this framework, we investigate situational and contextual activism: a project on radicalism within art practices.