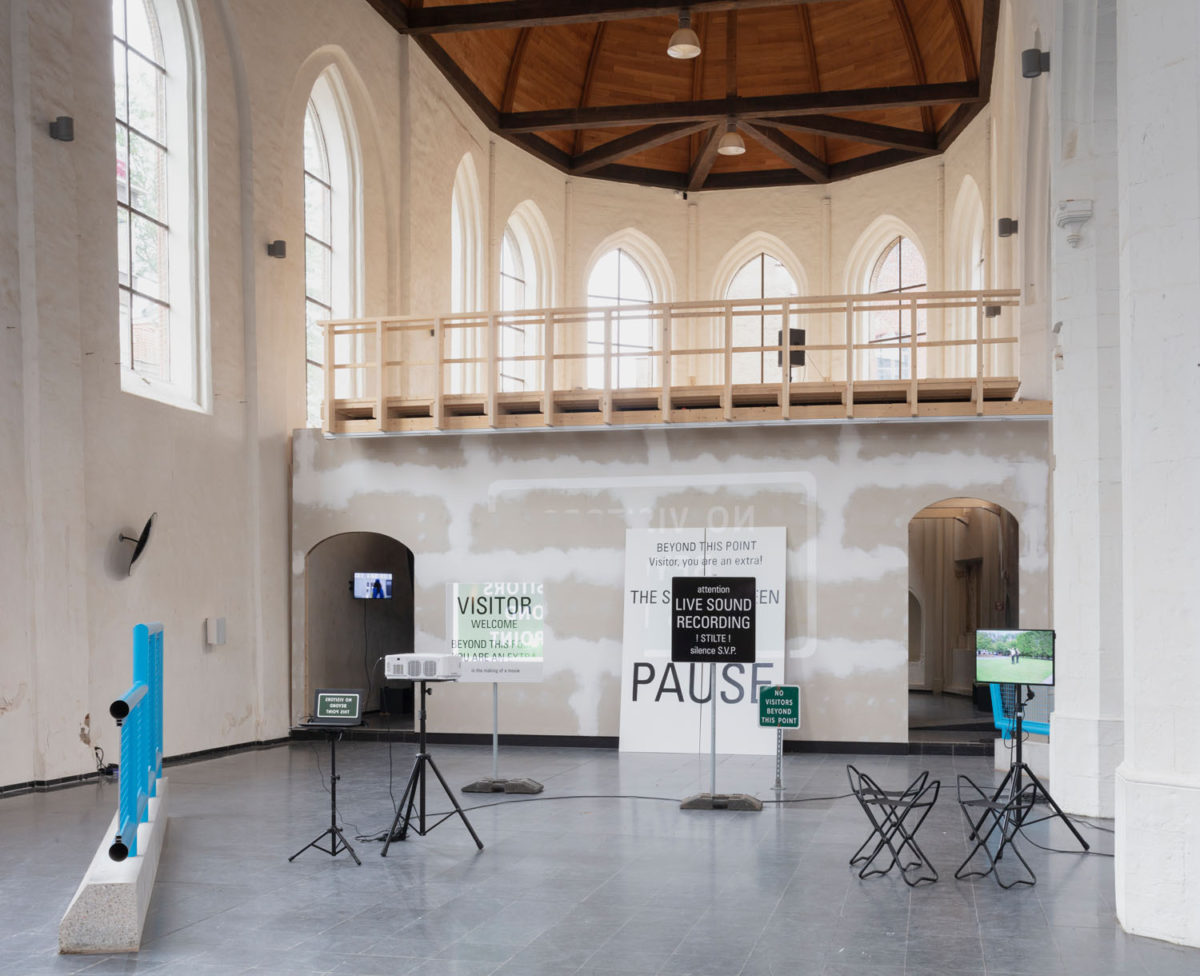 La Fabrique d'un Single screen is a production by Kunsthal Gent in collaboration with Escautville: a film performance by THAT'S IT! Dia:Beacon, realized by Joëlle Tuerlinckx

Performances on 20 September, 1 November and 20 December

SHORT INTRODUCTION
This autumn, Joëlle Tuerlinckx makes Kunsthal Gent her studio for the editing of the film The Single Screen, a project that was developed in Dia:Beacon (US) between 2015 and 2018. The process of reworking, editing and re-taking more than 200 hours of visual material becomes a new exhibition in Kunsthal Gent, which involves actors and collaborators, but also the public.

JOËLLE TUERLINCKX
Since the 1990s, and mainly after her participation in Documenta 11 in 2002, the artistic journey of the Belgian artist Joëlle Tuerlinckx (°1958) has gained momentum, with solo and group exhibitions in major institutions around the world (including the Museo Reina Sofia in Madrid in 2009, the Haus der Kunst in Munich in 2013, the Hermitage in Saint Petersburg in 2014 and her participation in Skulptur Projekte Münster in 2017). Today Tuerlinckx is among the most internationally renowned Belgian artists of her generation. She was recently nominated for the Belgian Art Prize 2020​.

2015 - 2018: THAT'S IT! Dia:Beacon
In 2015 the Dia Art Foundation (New York) invited Joëlle Tuerlinckx to realize a project for Dia:Beacon. The Dia Art Foundation is a New York-based foundation which was established in the 1970s and laid the foundation stone for its own museum in 1997, on the banks of the Hudson River in the city of Beacon, in order to present its iconic collection of mainly American Minimal Art. The invitation was interpreted by Tuerlinckx in such a way that the entire Dia:Beacon building, including the world-famous collection, employees, visitors and the entire infrastructure, served as a backdrop and/or stage for a film performance entitled THAT'S IT! Dia:Beacon. With Tuerlinckx, the history of the quite male American Minimal Art had a visit from a female colleague from Western Europe.

THAT'S IT! is the name of a group of works within Tuerlinckx's oeuvre that in the past already manifested itself as a theatre performance at Tate Modern in London (2014), at Veem Theater in Amsterdam (2014), at STUK in Leuven (2014) and at Kaaitheater in Brussels (2015). The subject of the THAT'S IT! series is Tuerlinckx's artistic practice, understood as a kind of 'mental studio' in which she exposes the creative process to the public, thereby elevating the conflict between the studio as the artist's workplace and the space in which art is ultimately presented - a gallery or a museum - to a theme. She experiences this displacement as a kind of translation that - like any translation - is not unambiguous and can lead to different interpretations. Tuerlinckx attempts to resolve this conflict by thinking the world not only from front to back but also from back to front, from left to right and from right to left and on all possible diagonals. For Tuerlinckx, this ultimately apparent conflict between the studio and the gallery space is, on a different level, also the apparent conflict between the original and its copy. Through an emancipatory artistic tour de force, the copy dethrones the original.

This working method is the starting point for the film performance THAT'S IT! Dia:Beacon and for the resulting film entitled The Single screen. During five stays at Dia:Beacon (between 2015 and 2018), Tuerlinckx moves through the museum like a reckless memory machine memorizing all of the museum’s past, present and perhaps even future artistic acts. Time is rampant. Tuerlinckx comments, paraphrases, classifies, fillets, stretches and condenses the American and, by extension, the entire art history in a poetic way. The open, closed or specially opened closed museum serves as a stage for these performances, producing more than 200 hours of sound and visual material and resulting in five sequences of footage, divided into scenes that stand alone or form potential building blocks for the overall compositions or edits of the film The Single screen.

2019 - IN KUNSTHAL GENT: La Fabrique d'un Single screen
The sequences in the exhibition at Kunsthal Gent – projected or on monitors – are accompanied by objects and sculptures specially made for this presentation (e.g. a sound-sensitive light, a ‘divine flame’ on the ceiling of the church space) or spatial interventions that are intended to evoke the memory of Dia:Beacon’s world-famous collection (e.g. a line version of Heizer’s dazzling work North East South West on a 1:1 scale, or the red carpet in the hallway of Kunsthal that refers to Walter de Maria’s 360˚ I Ching/64 Sculptures) – milestones in American art history firmly or dream-like imprinted on us, but relentlessly and ghost-like accompanying every artist.

The title of this exhibition, La Fabrique d’un Single screen, speaks for itself: the editing of the film will be done live, on the spot, in the presence of the audience, by VJs – i.e. by various THAT’s IT! actors and musicians, and sometimes also by the audience or the employees of Kunsthal Gent. Each of these one-and-a-half-hour VJ sessions will be supplemented by live voice-overs, singing, subtitling or commentary. Once again, time is rampant. Tuerlinckx interweaves real and fictional times, creating – under tight artistic control – a disarray of footage shot in Beacon at different points in time. She moves the Dia collection to Kunsthal Gent as a live memory performance, nourished by her own rich visual archive and by the artist Christoph Fink’s sound archive. It’s a tangle, a multiple way of thinking which disrupts the linearity of the Hollywood (i.e. American) story.

La Fabrique d'un Single screen will lead to different versions of The Single screen: the film as a stream of images and sounds, as a never-ending beginning, the film as a report… At the end of the process, there will be an ensemble of unique standard-length one-and-a-half-hour-long feature films on the table, in this case literally in a golden showcase.

How much closer can the making of an artwork, of a film, be brought to the public than by doing it live, in the presence of the public? How much more can the artist's studio merge with the public space of an institution? Of all the works in the THAT'S IT! series so far, La Fabrique d'un Single screen is Tuerlinckx’s most central artistic attempt to close the circle between the studio (the creation) and the exhibition space (the presentation of the artwork), between the mental and the physical space. In La Fabrique d'un Single screen both coincide, and their relationship reverses.

And what better place for this spectacle than Kunsthal Gent, an organization housed in a former monastery with the DNA of both a workspace and a presentation space? The old-fashioned Flemish "kerkfabriek" (fabric committee, lit. “church factory”), the public institution managing the church’s resources in order to give form to the spiritual, is reversed in Tuerlinckx's "film factory": La Fabrique as a public institution managing the artist's spiritual-artistic capital, in order to give form to it materially.

After the project in Kunsthal Gent, Tuerlinckx will take THAT'S IT! Dia:Beacon to a next level. In 2020 during the presentation of The Single Screen at the S.M.A.K. Ghent and at Dia:Beacon, Tuerlinckx will restart the dialogue with art pieces of the collection of both museums. 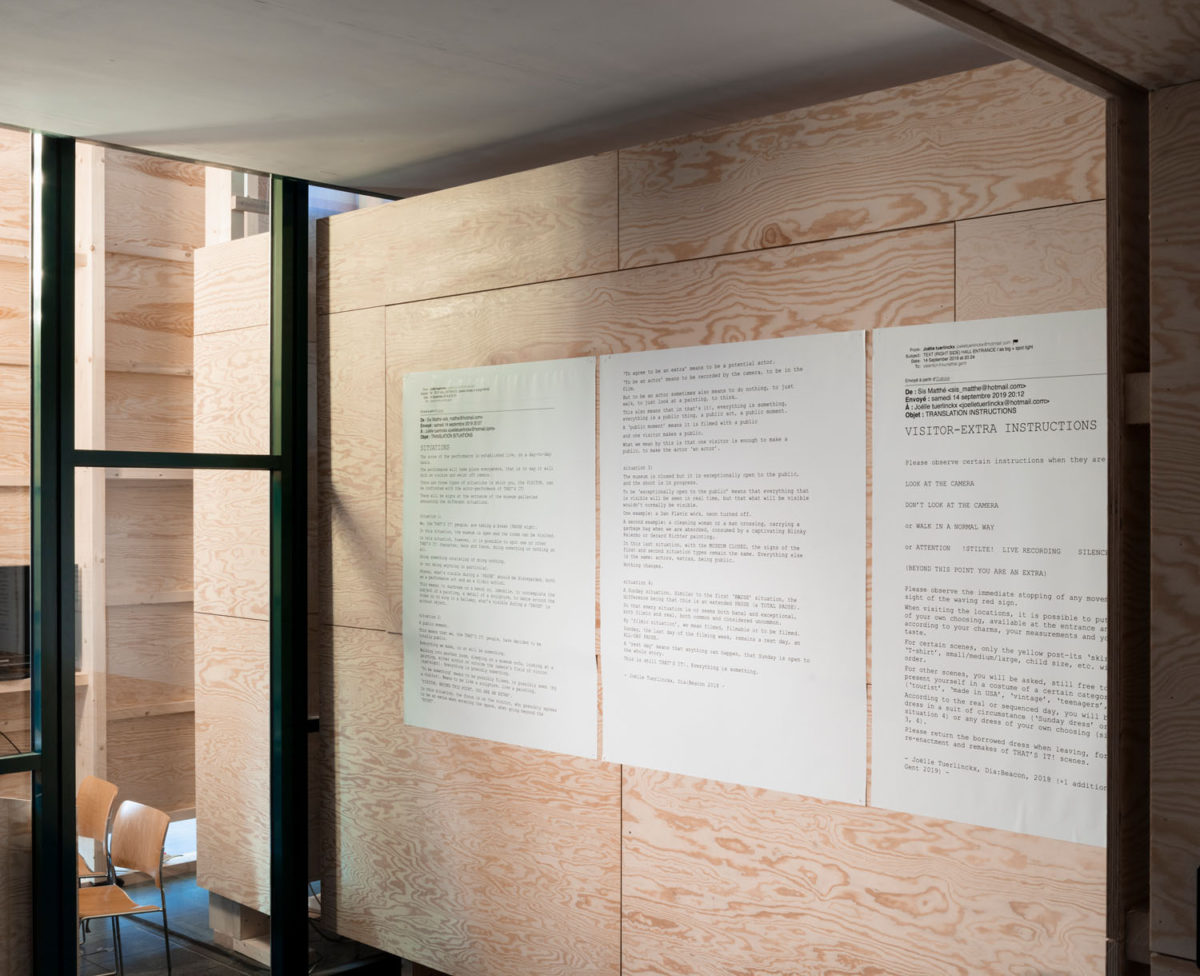 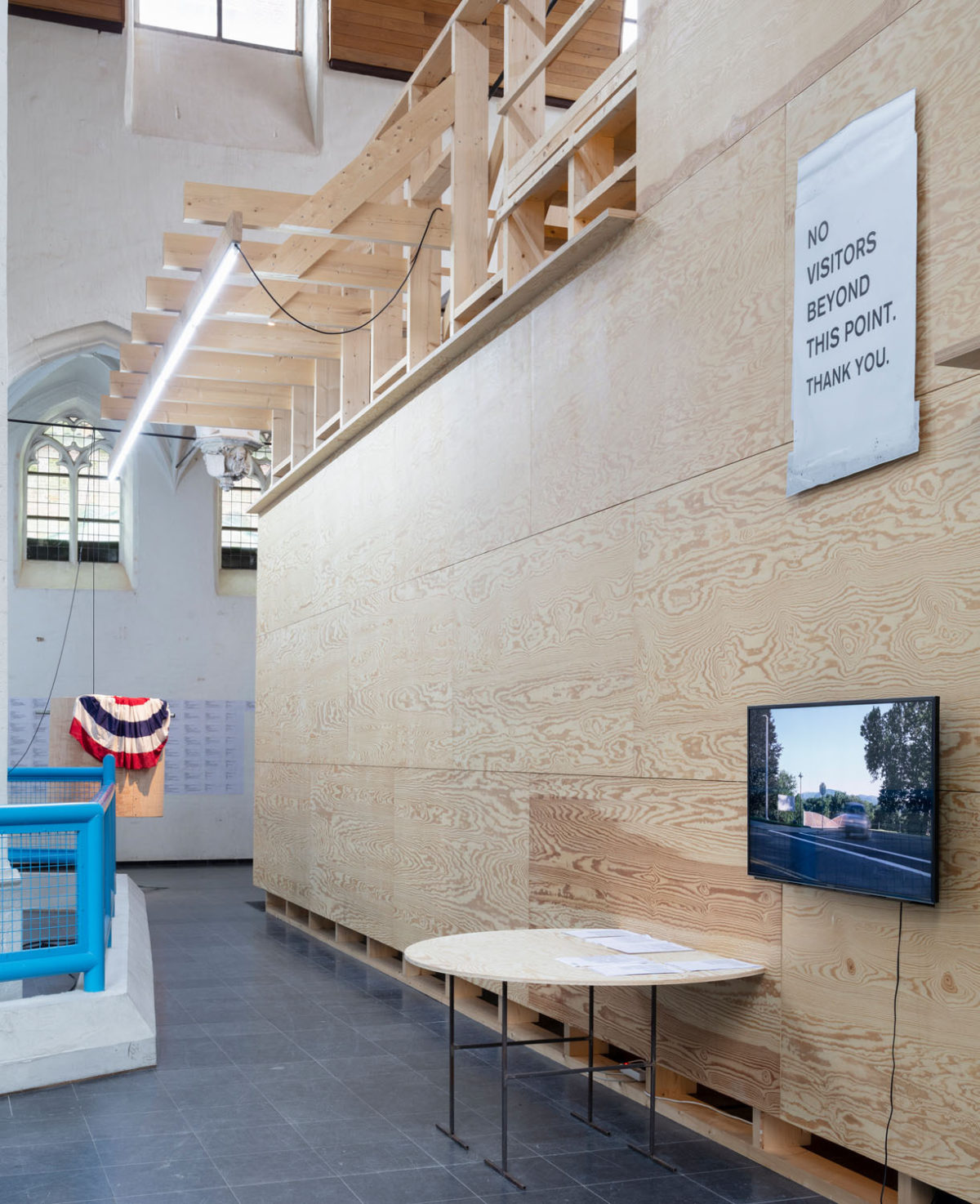 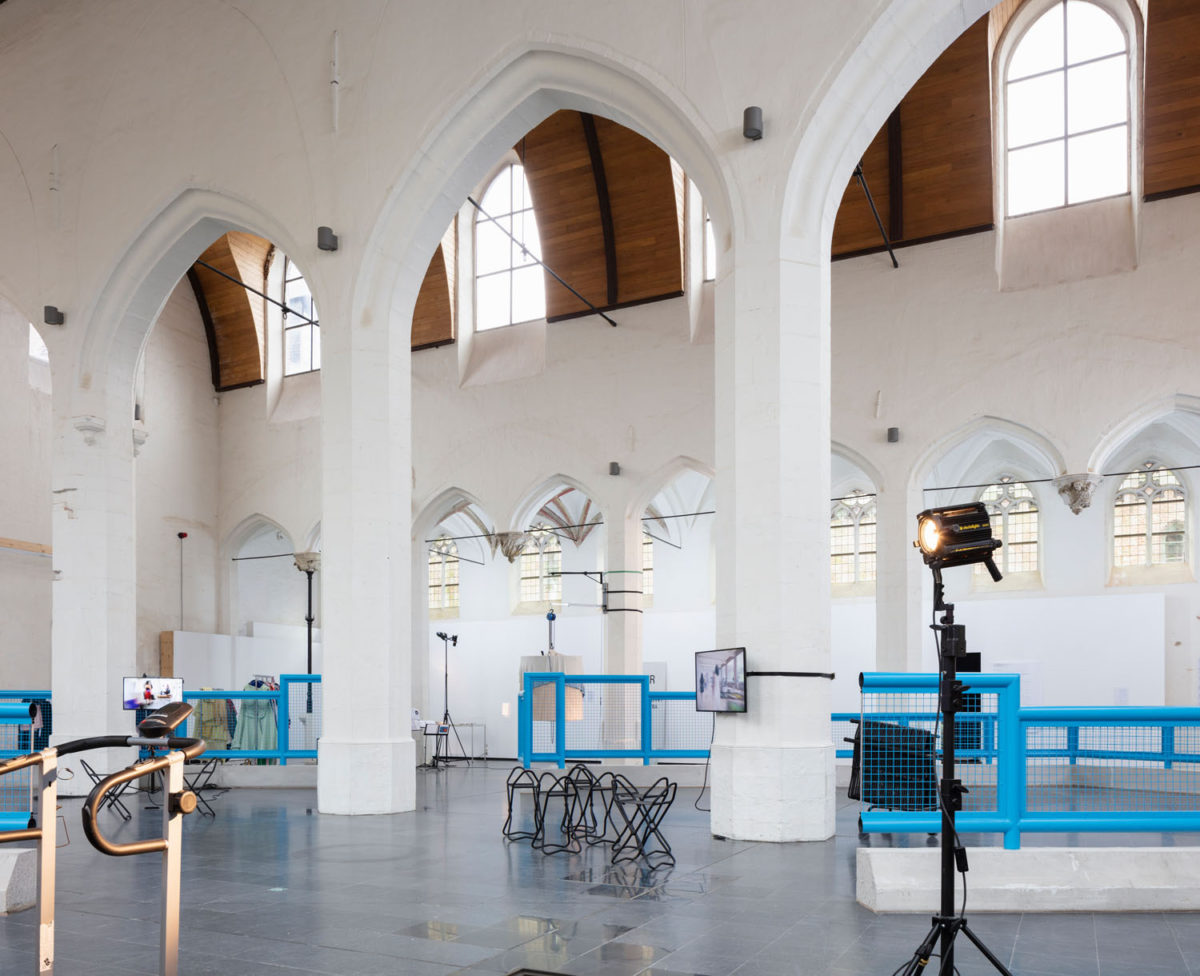 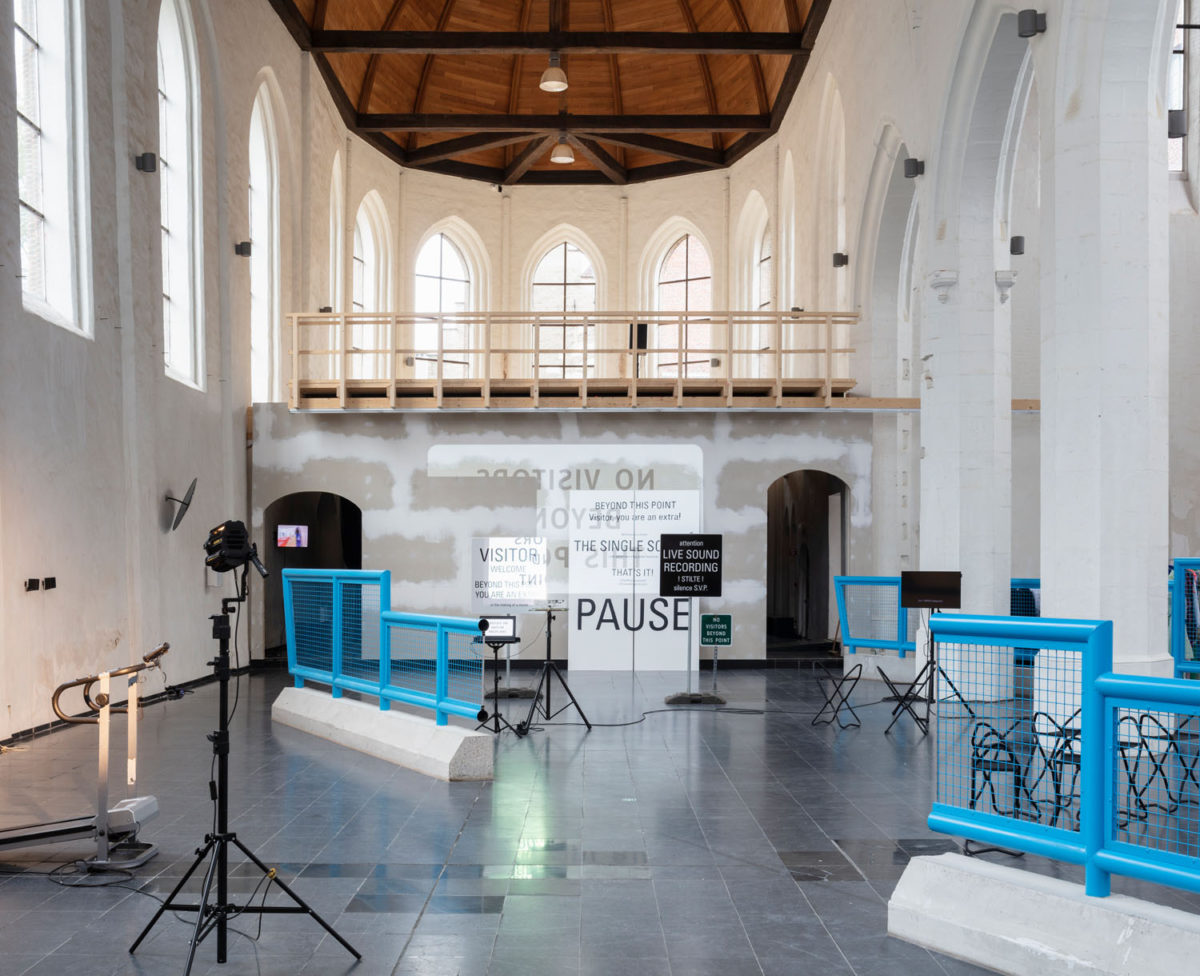 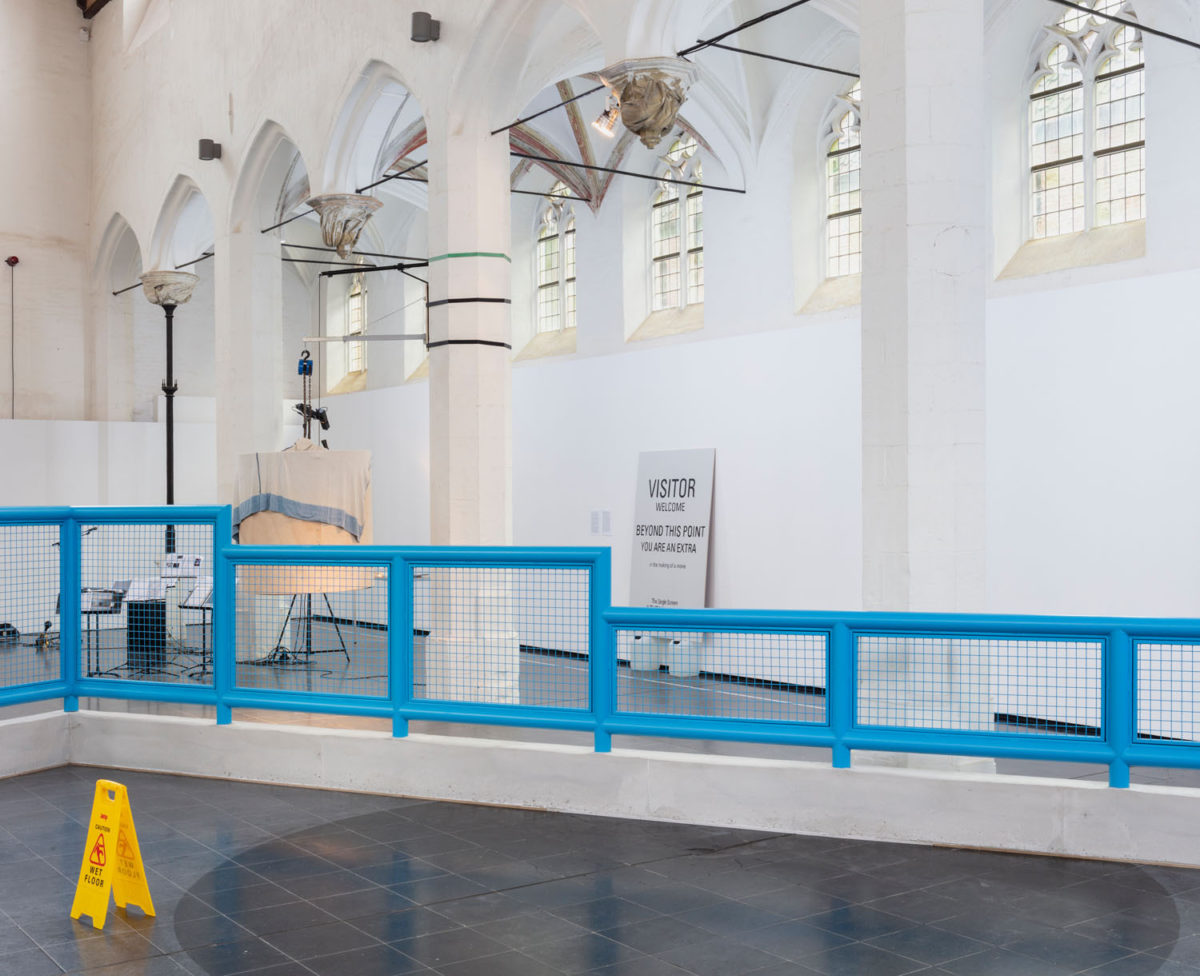 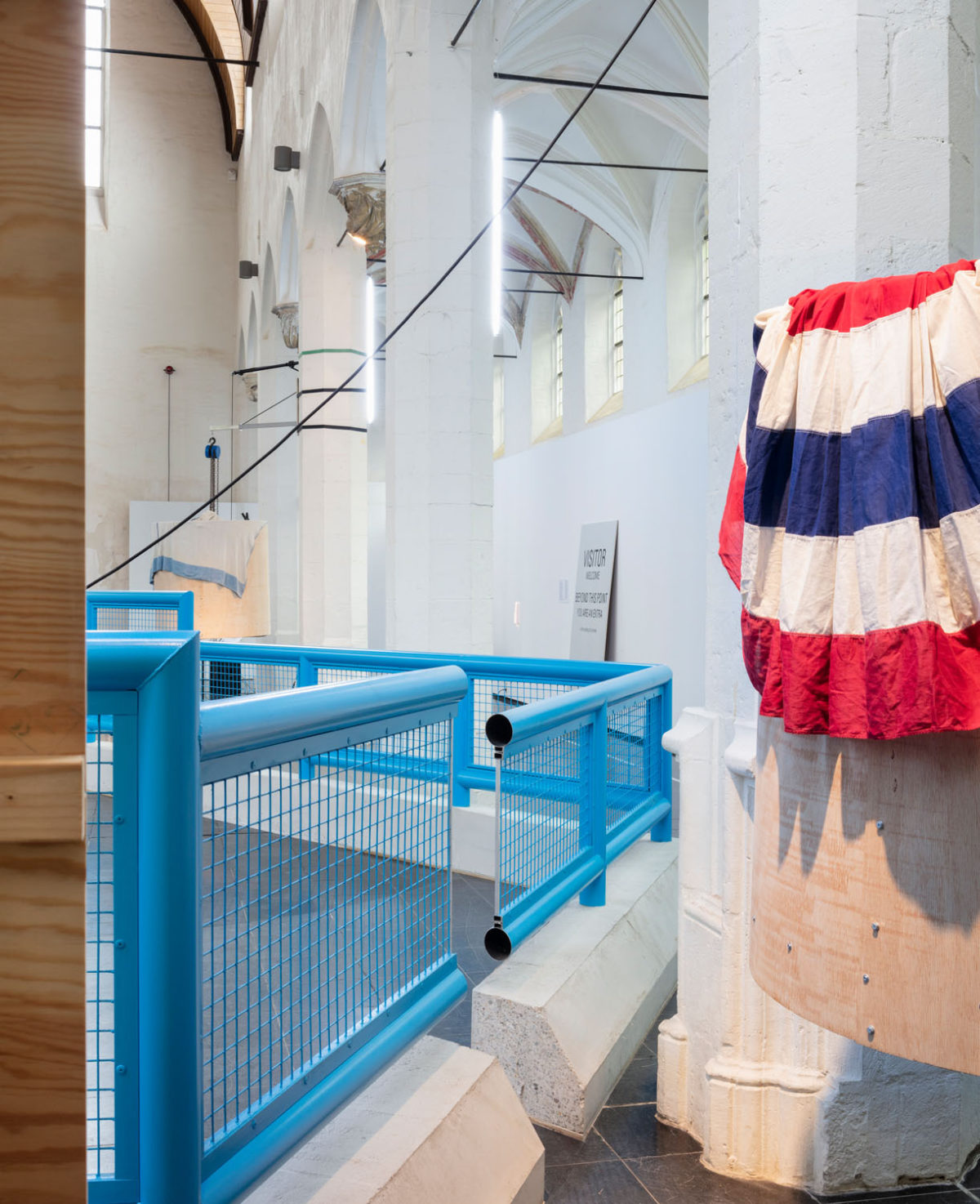 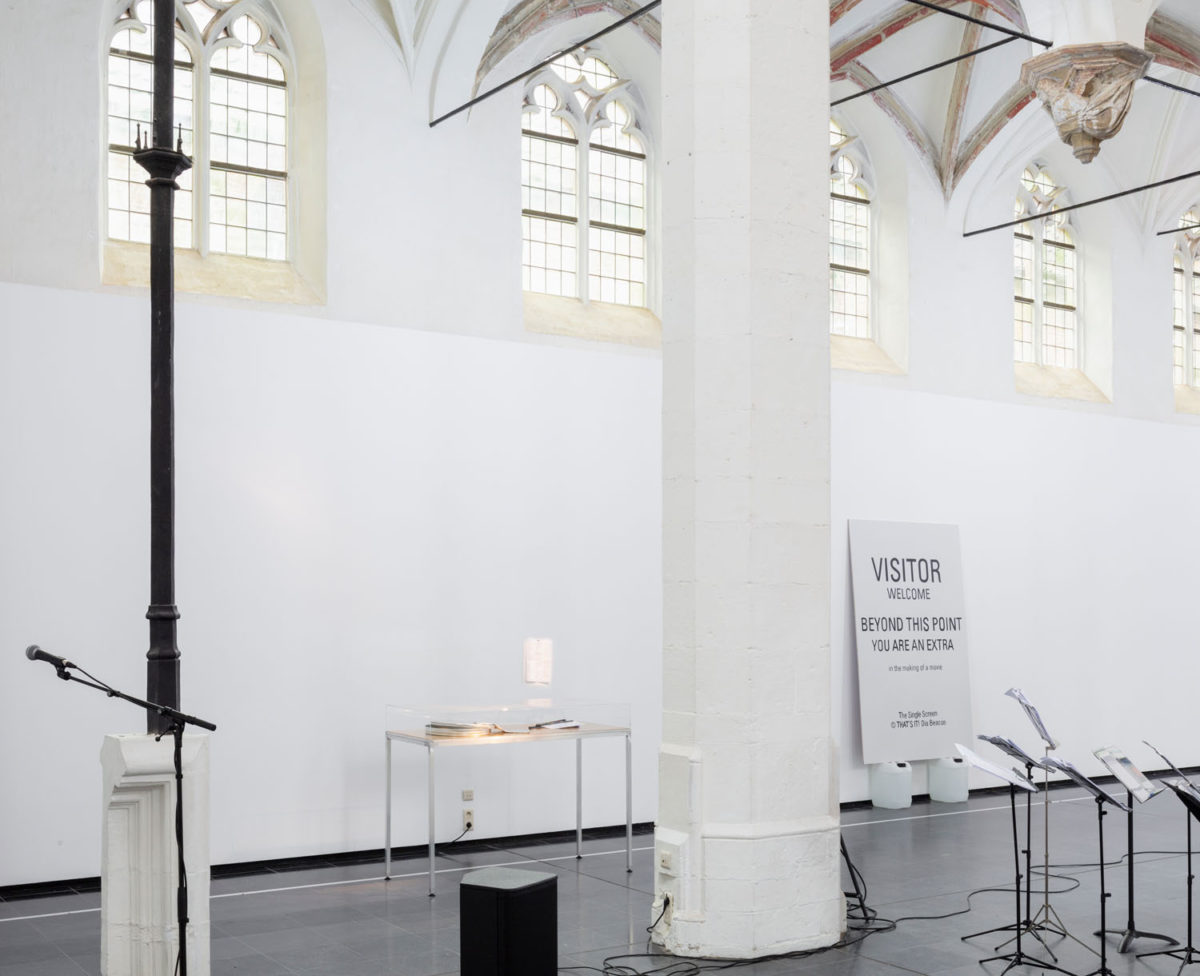 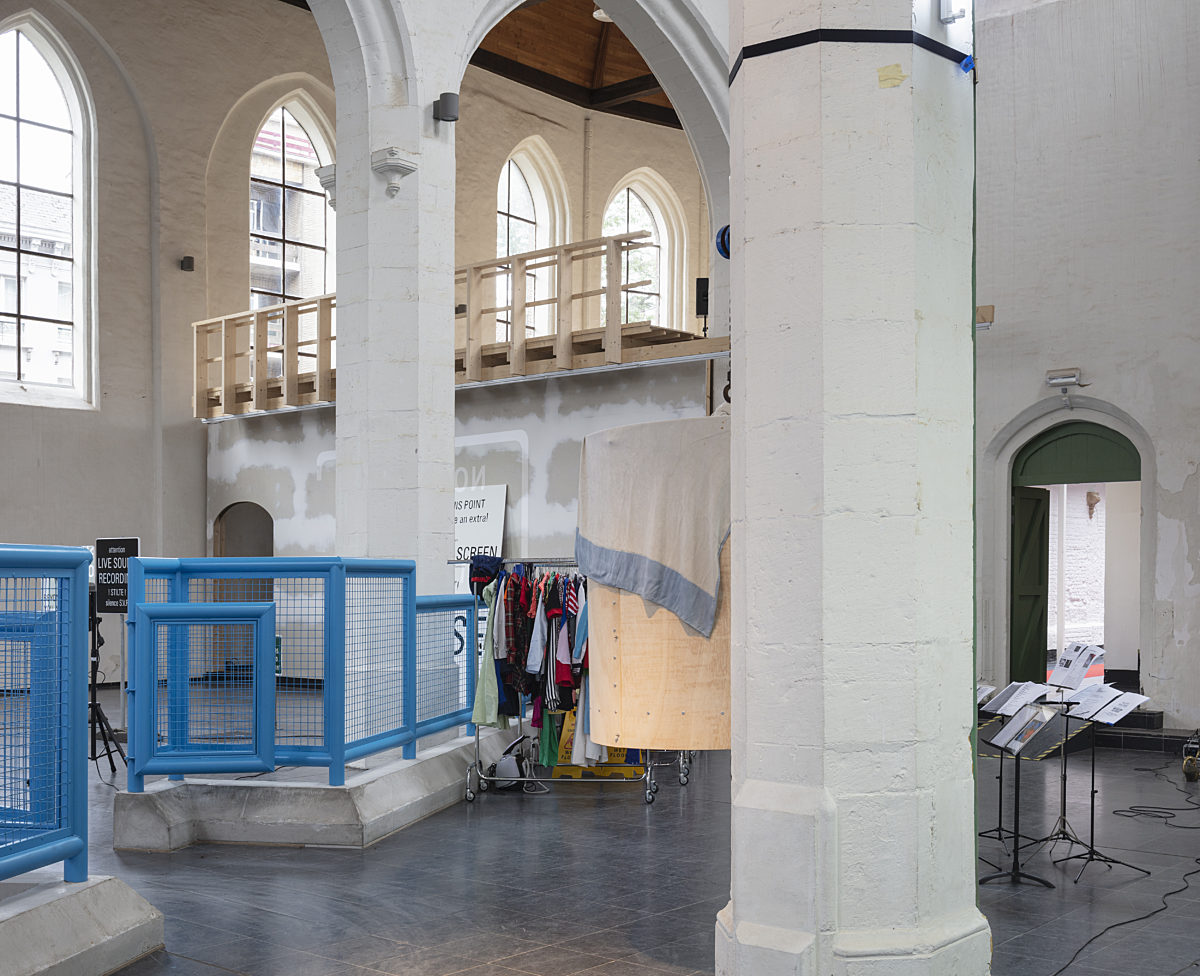 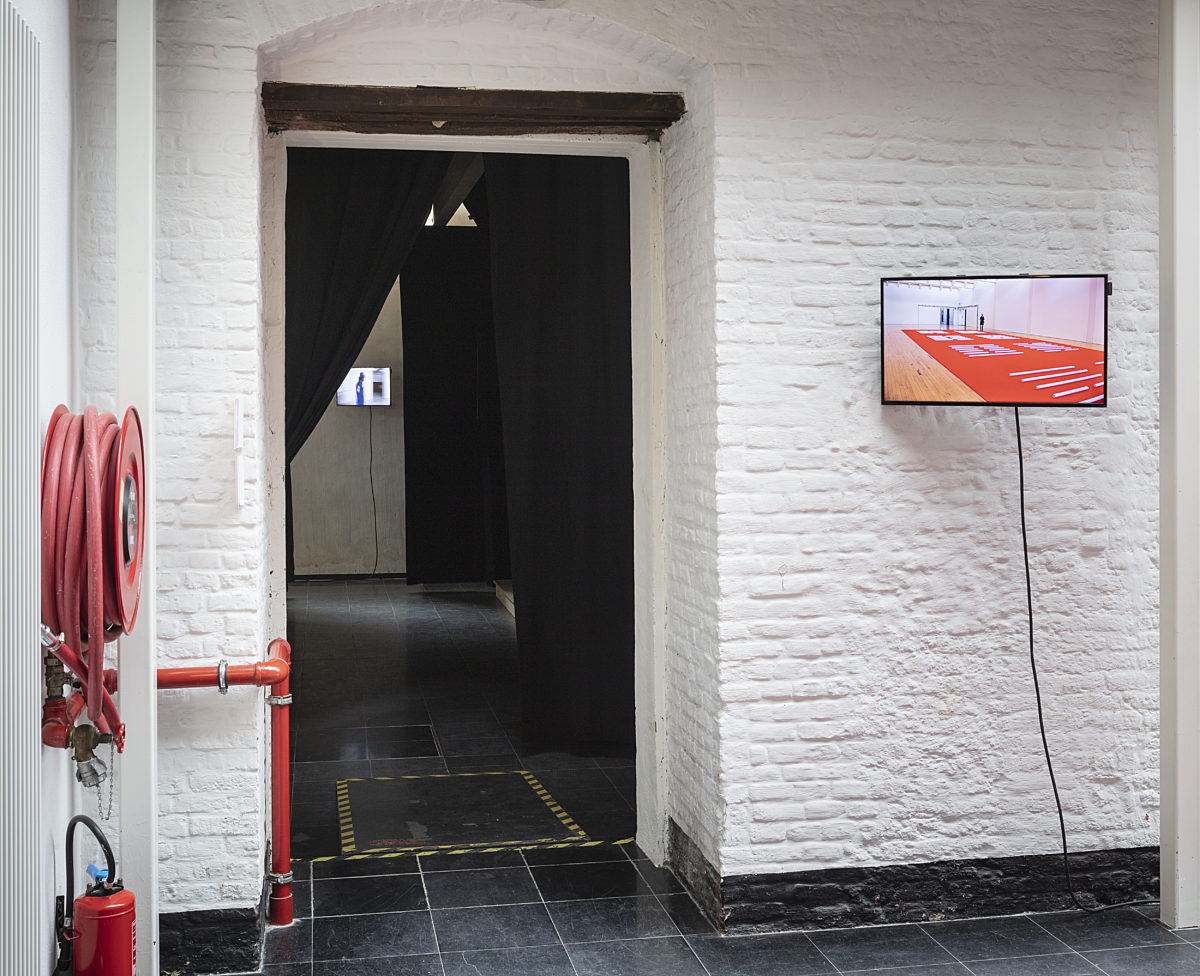 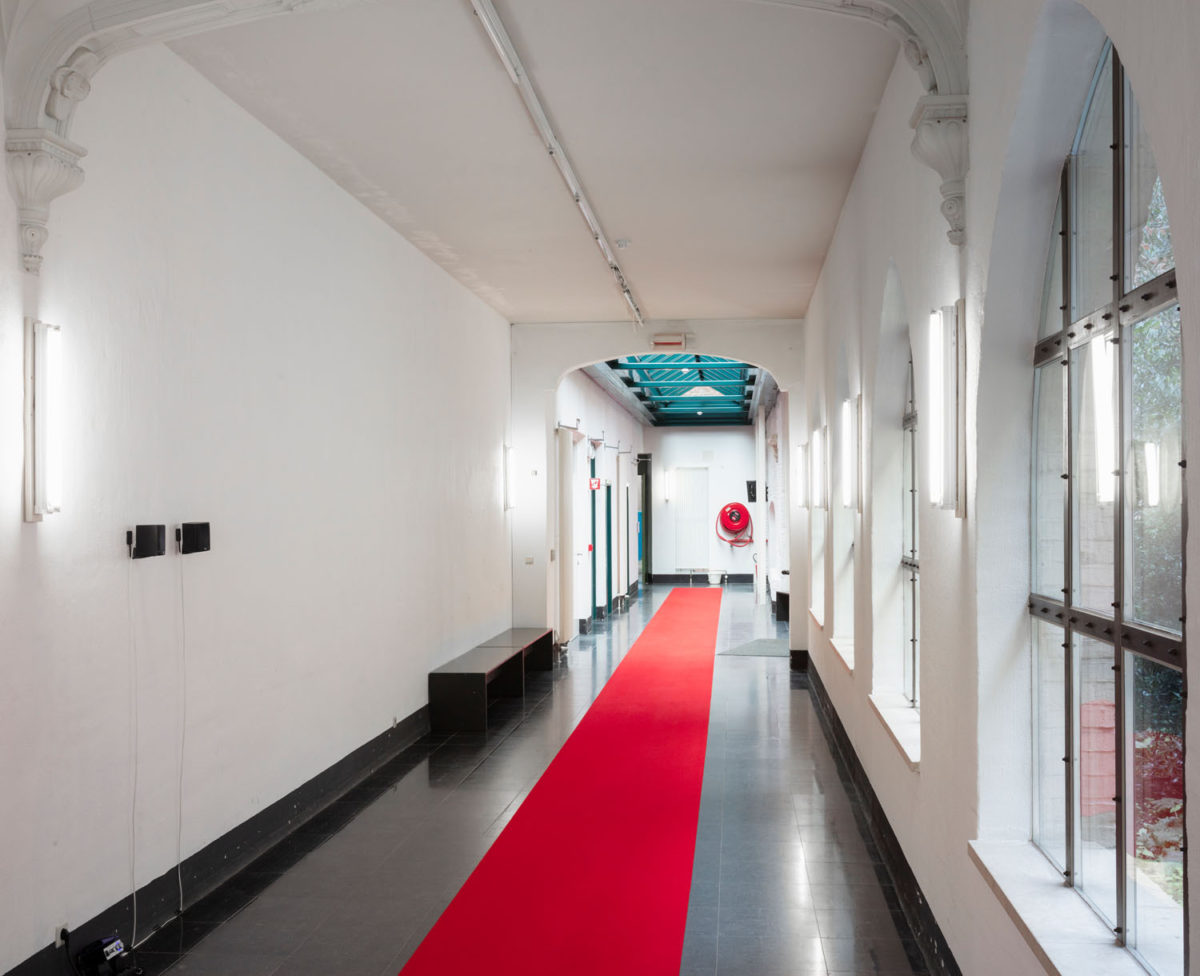 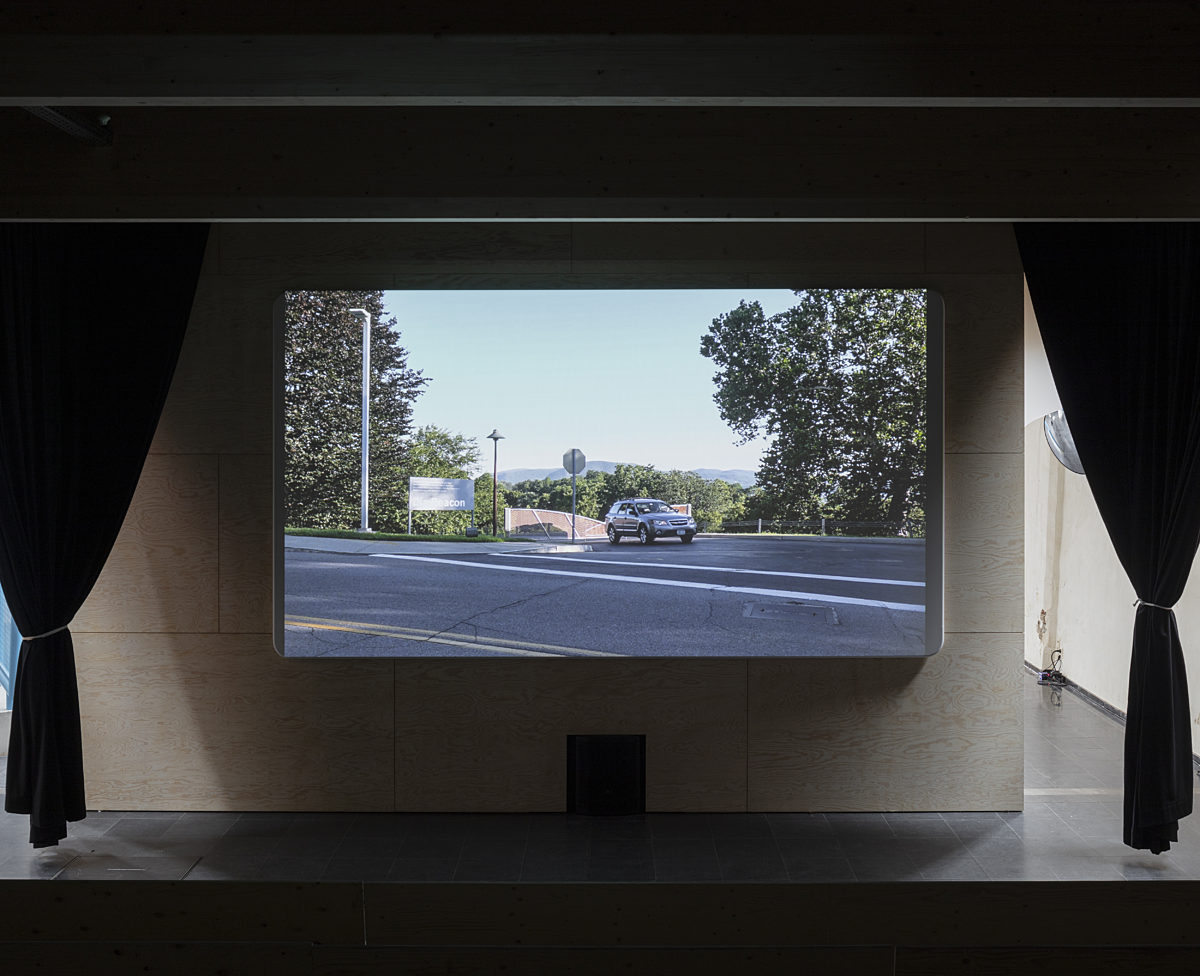 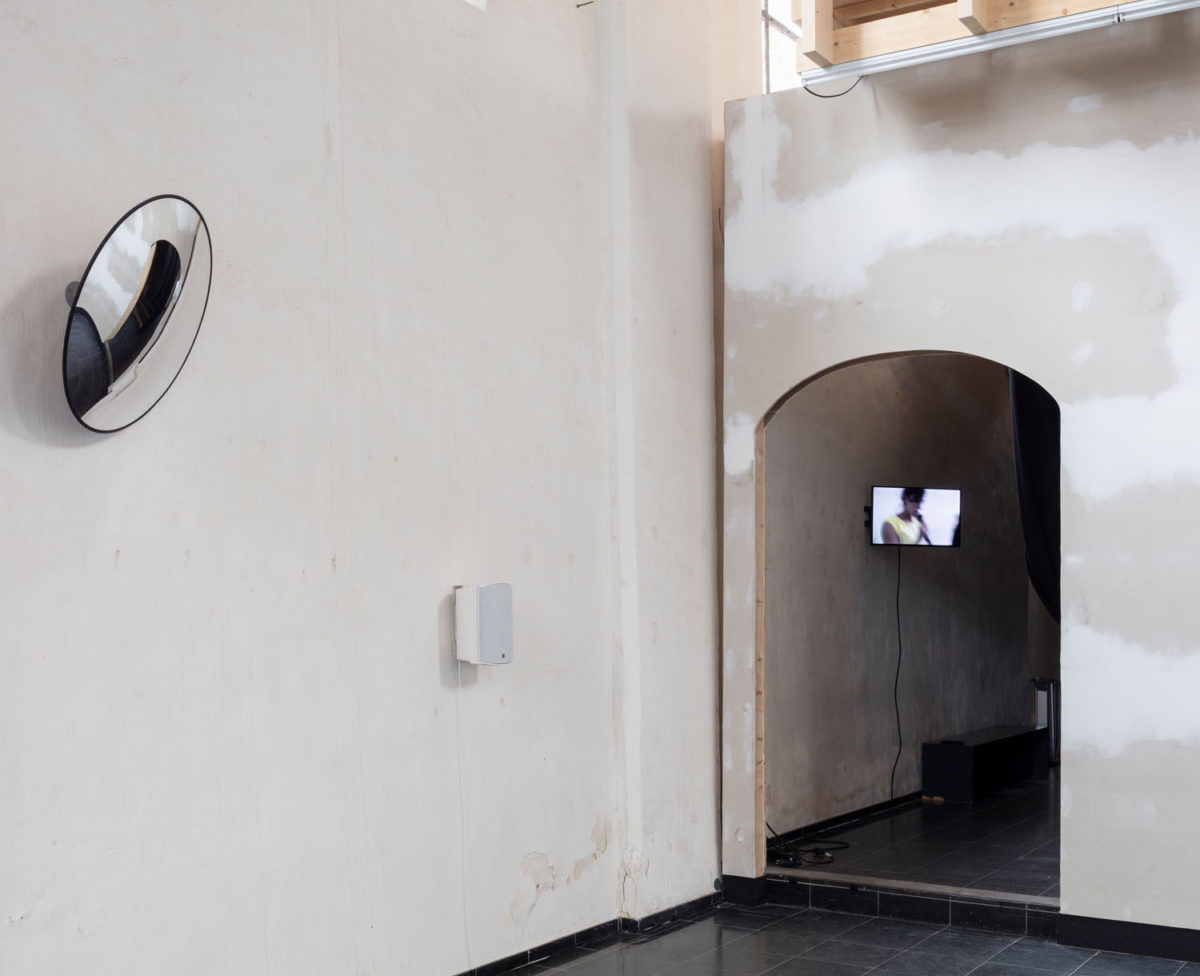 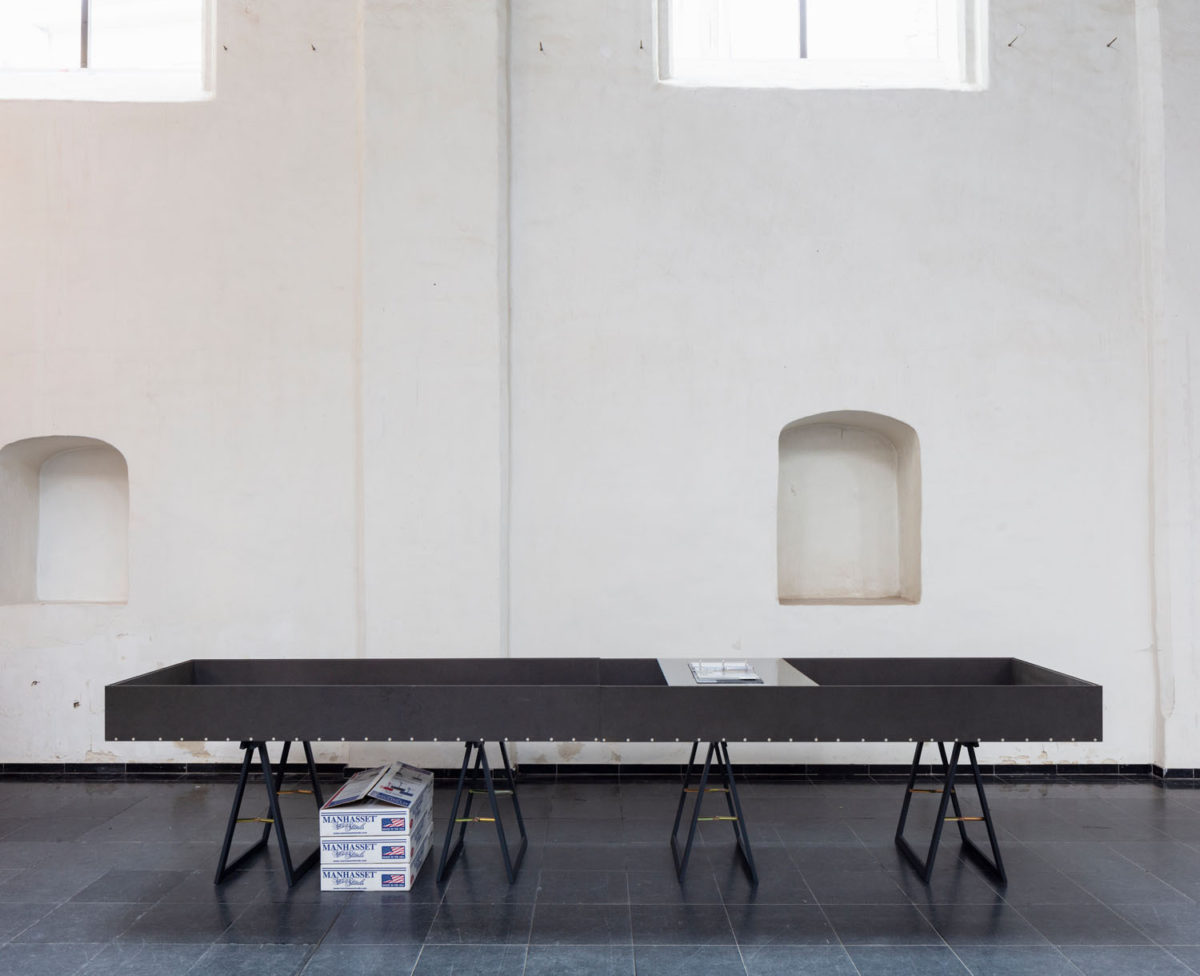 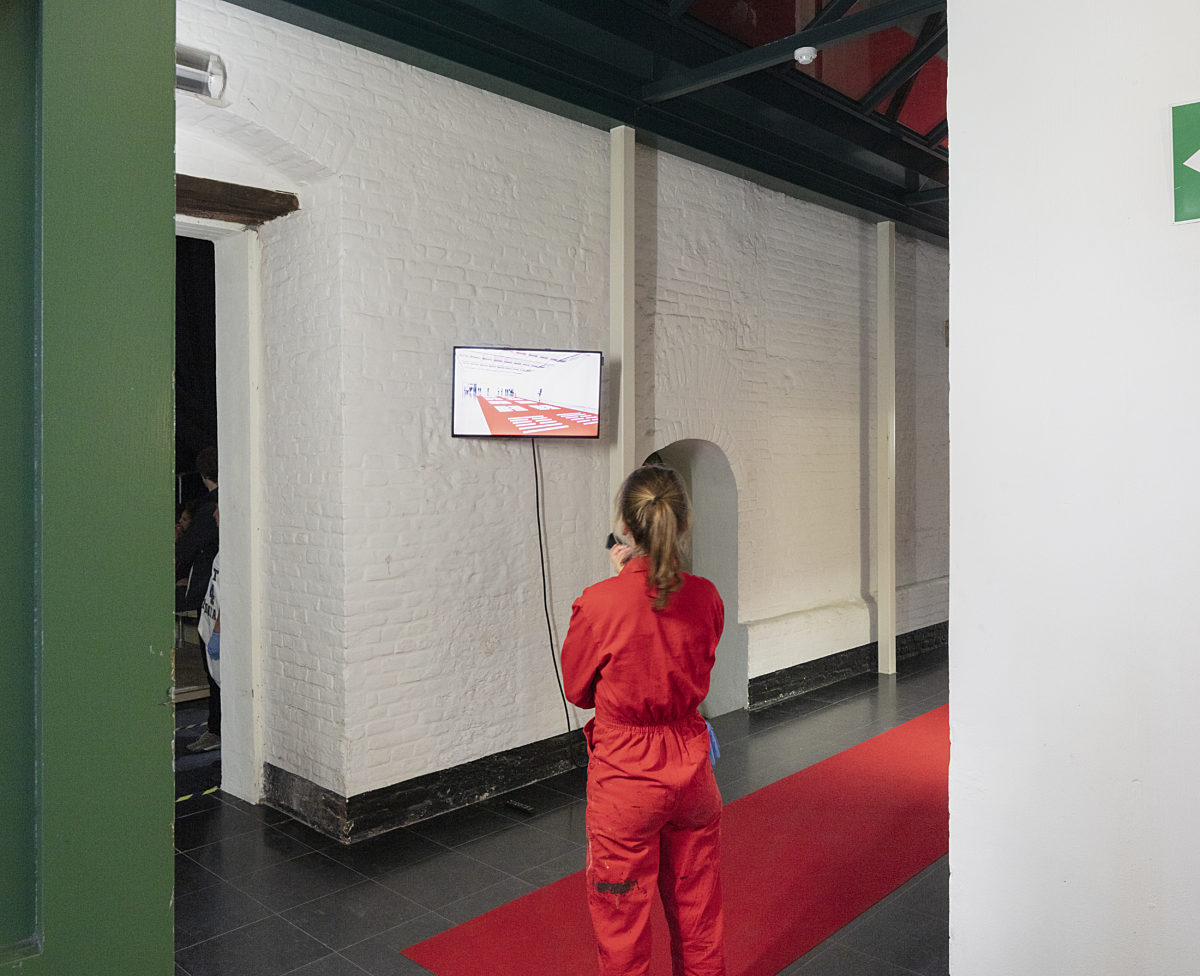 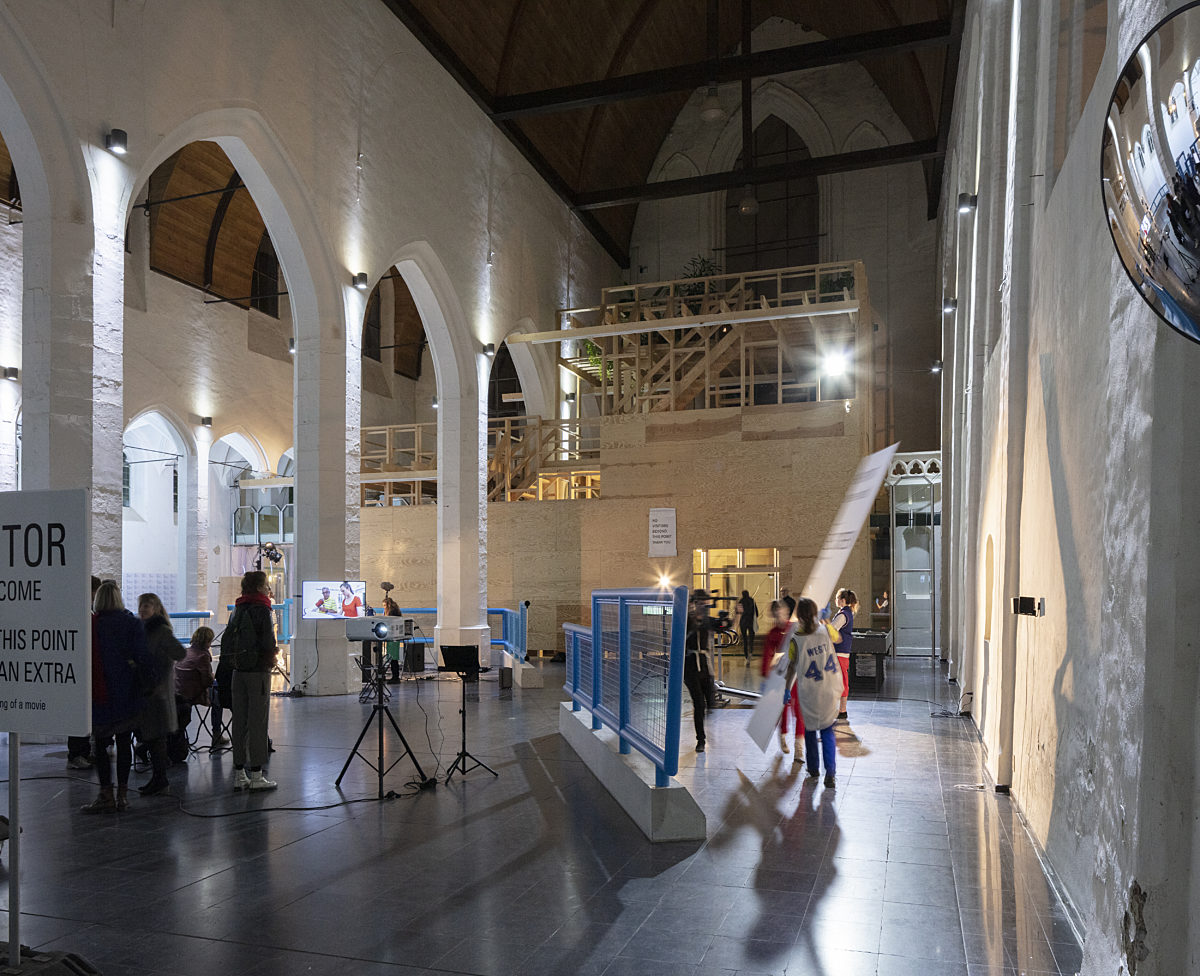 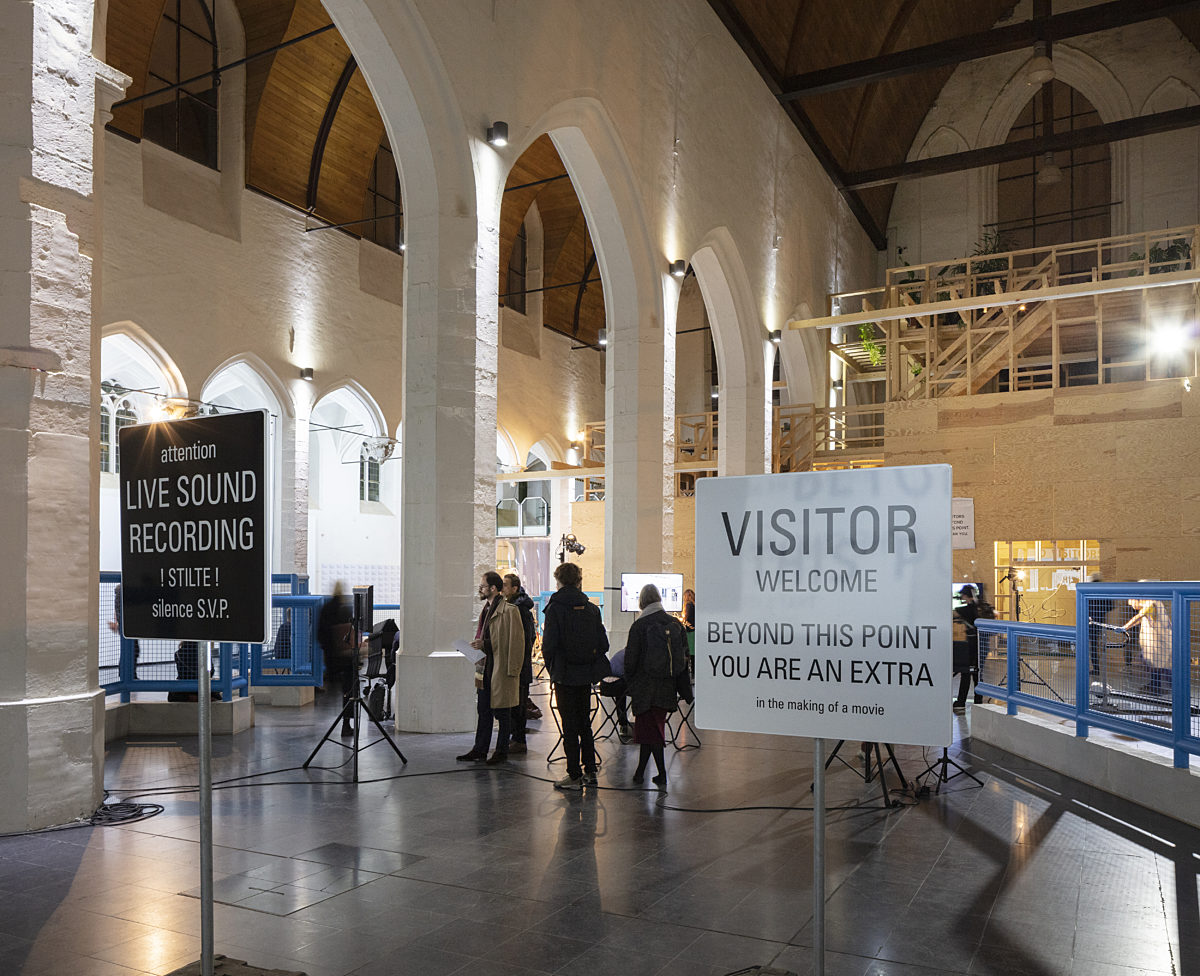 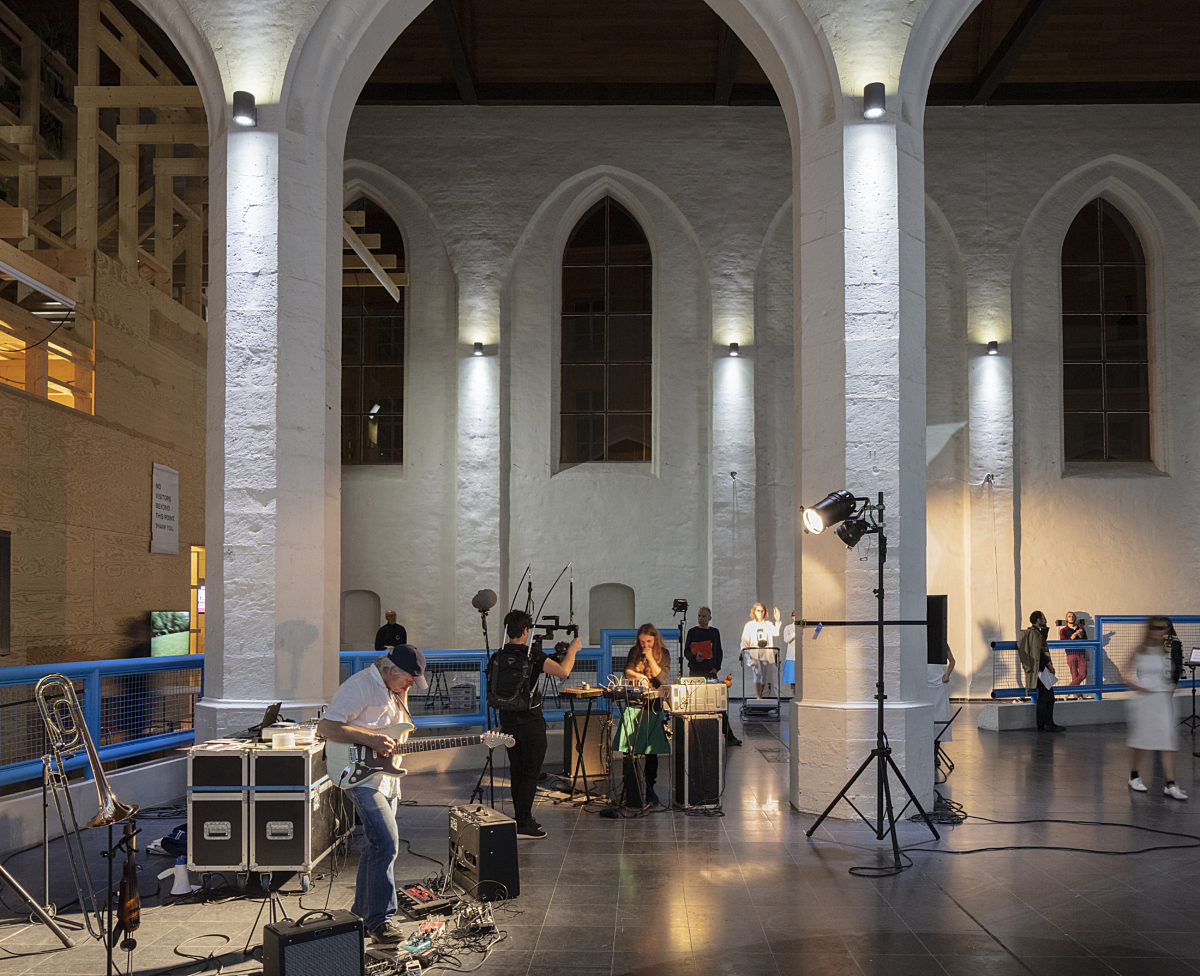 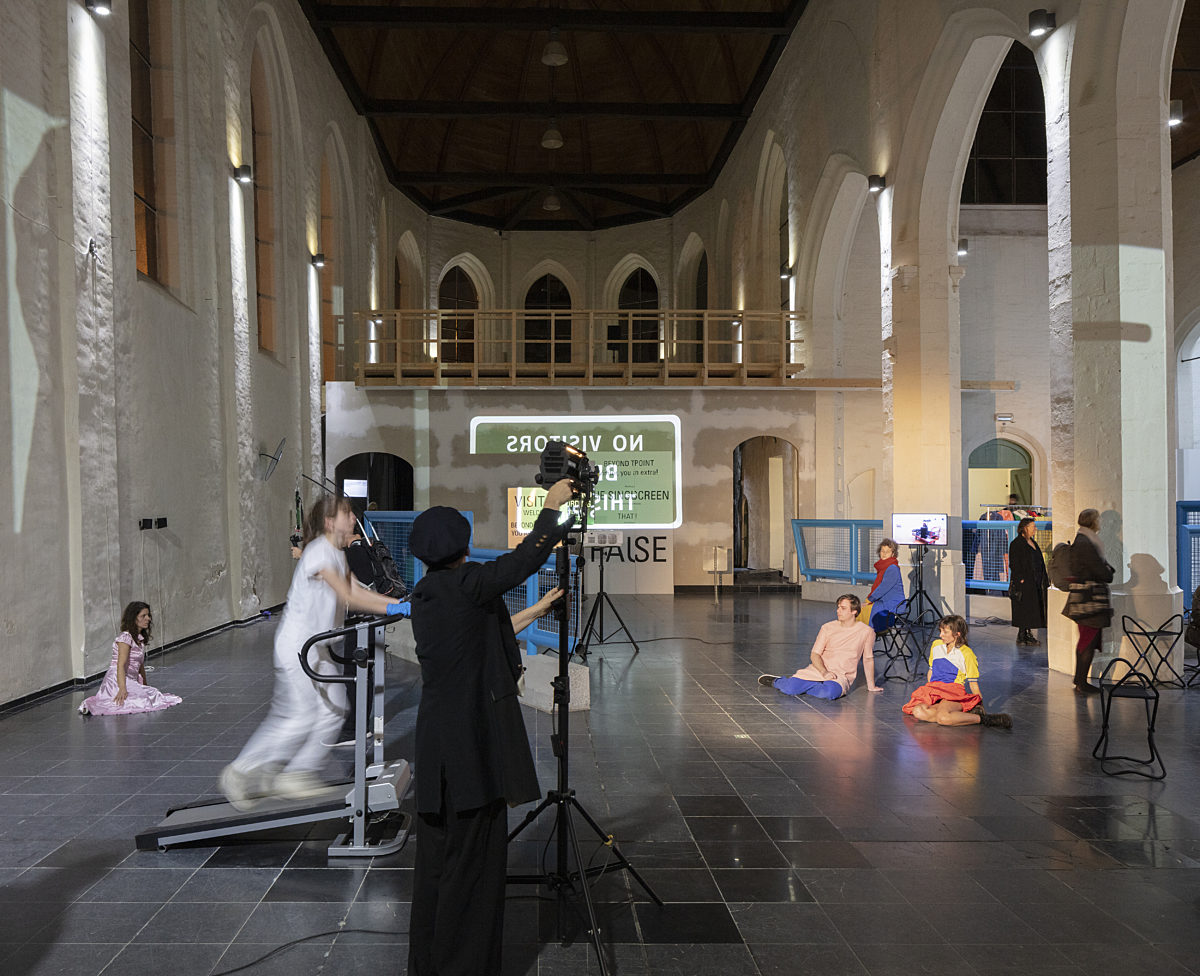 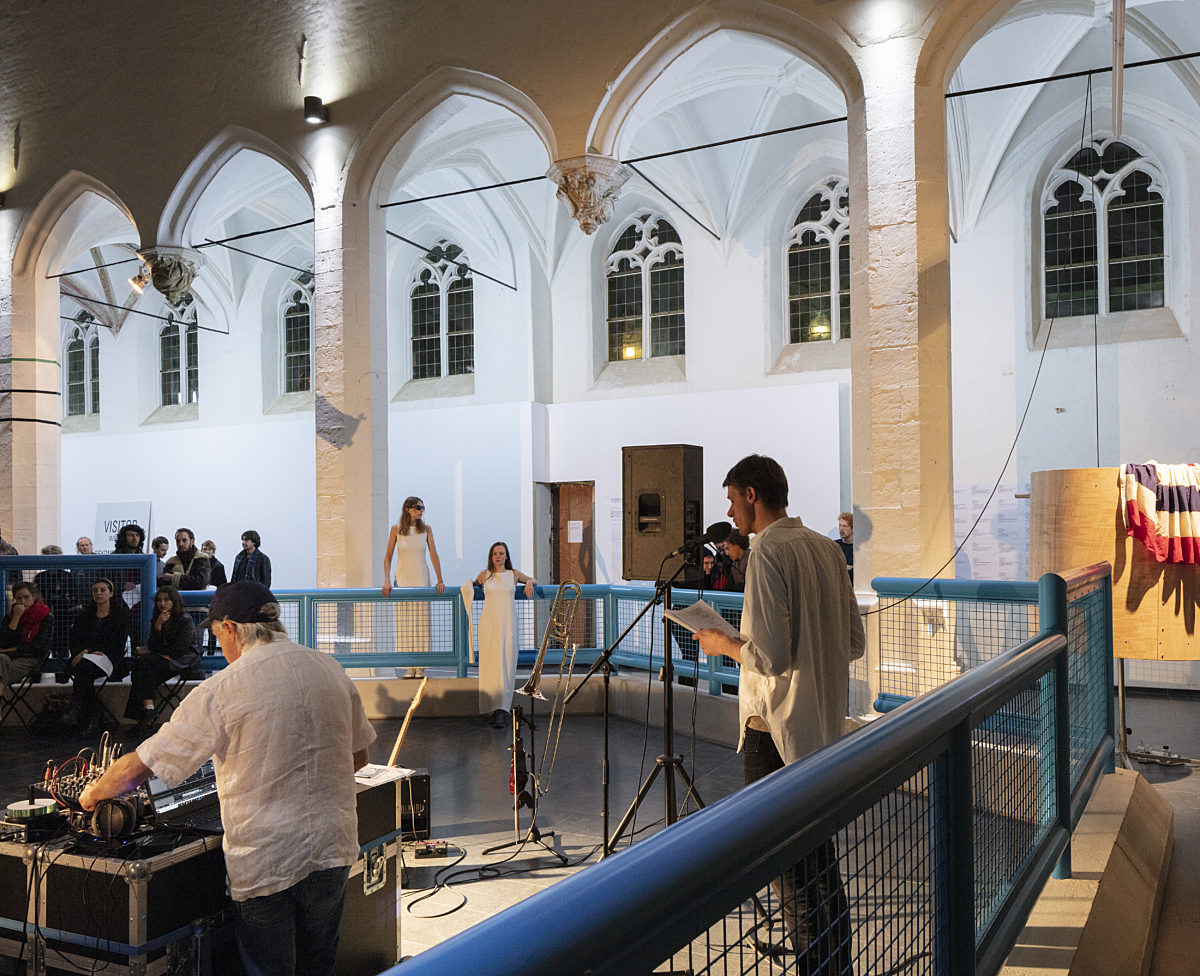 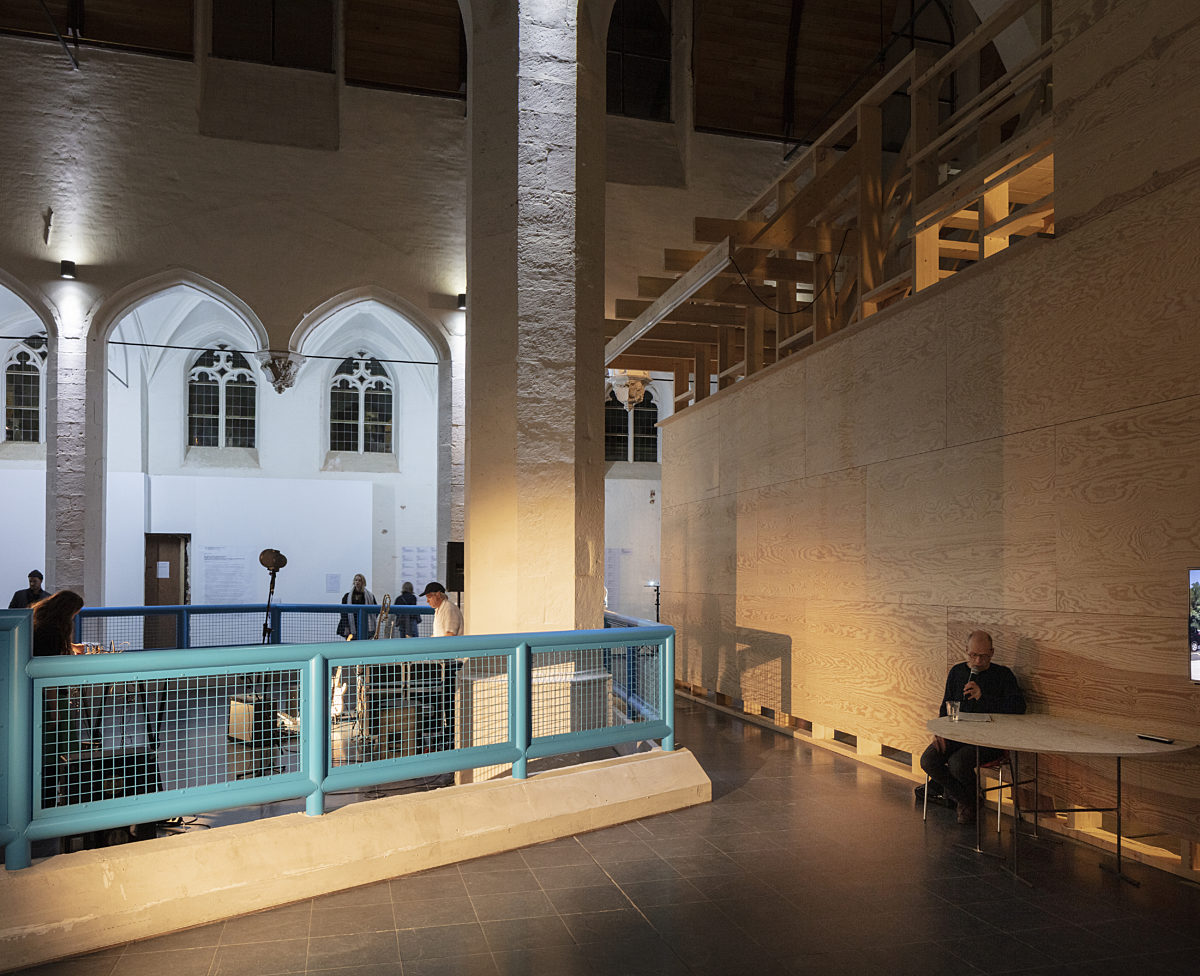 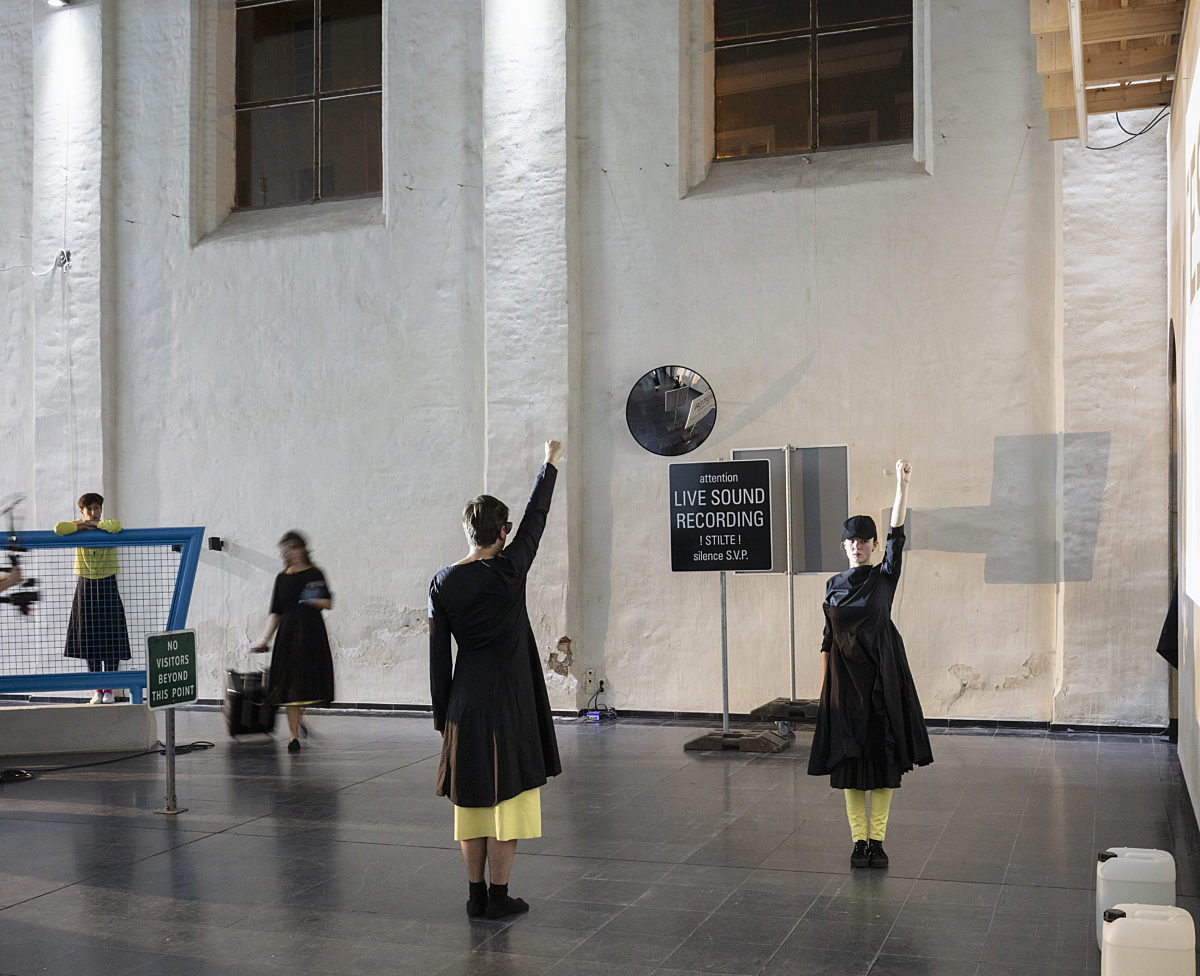 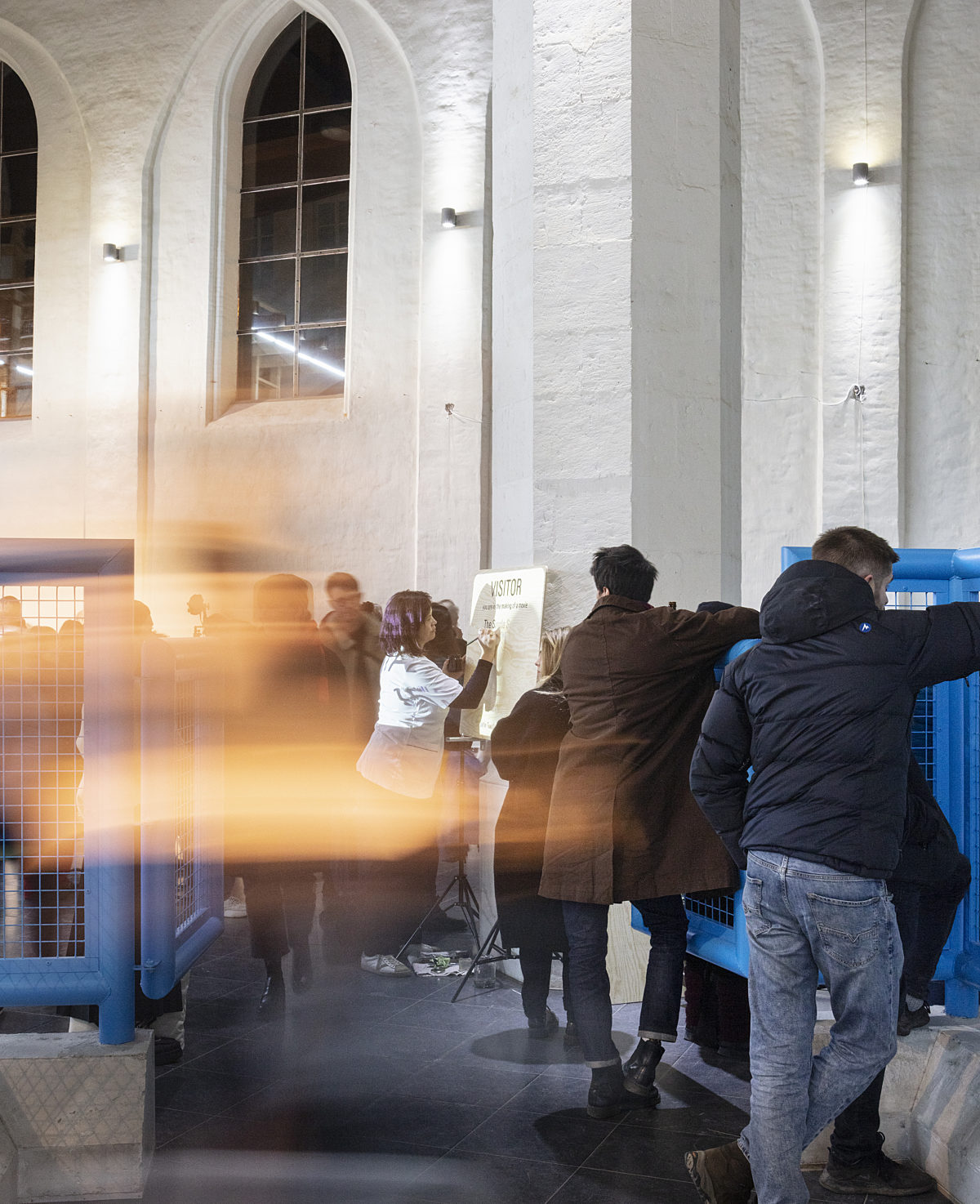 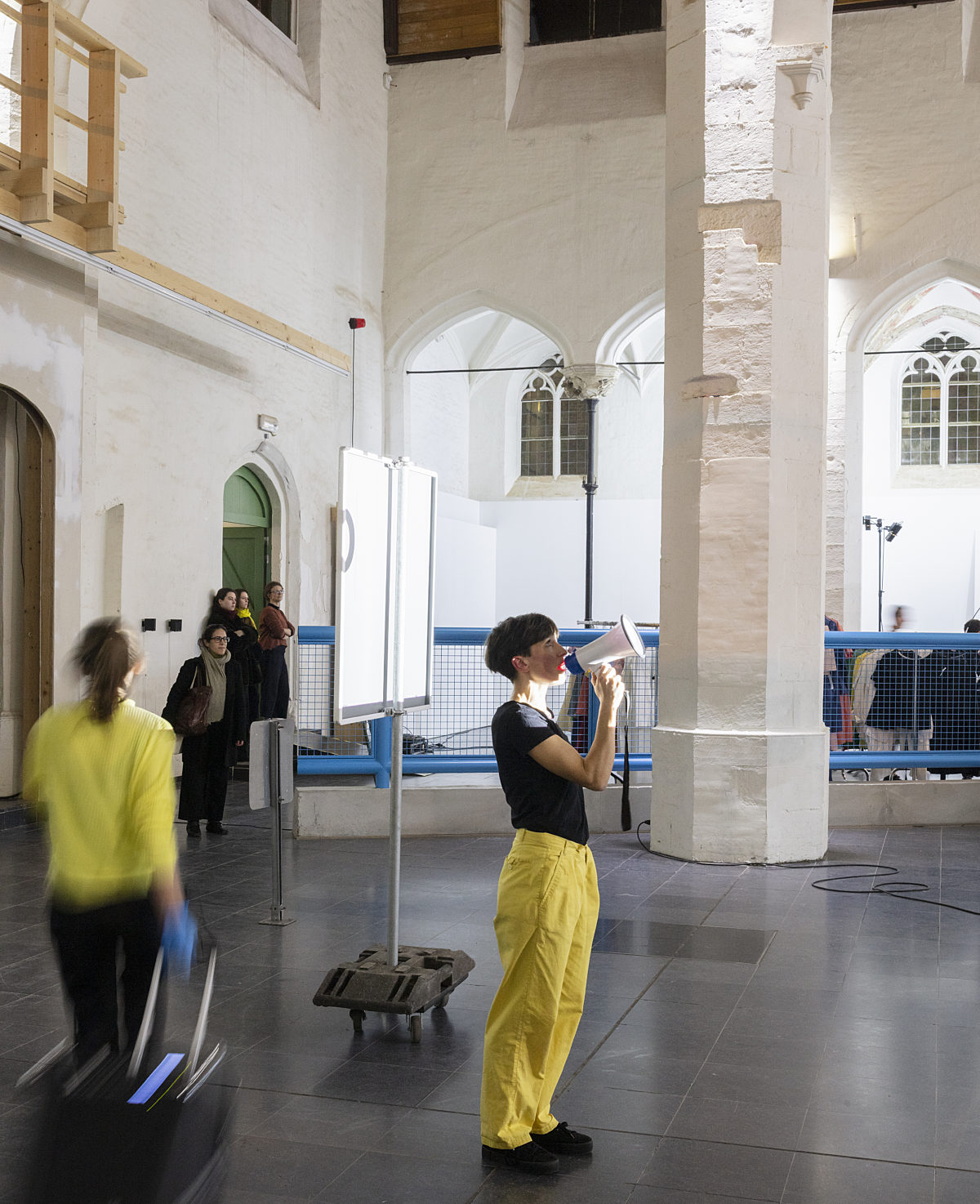 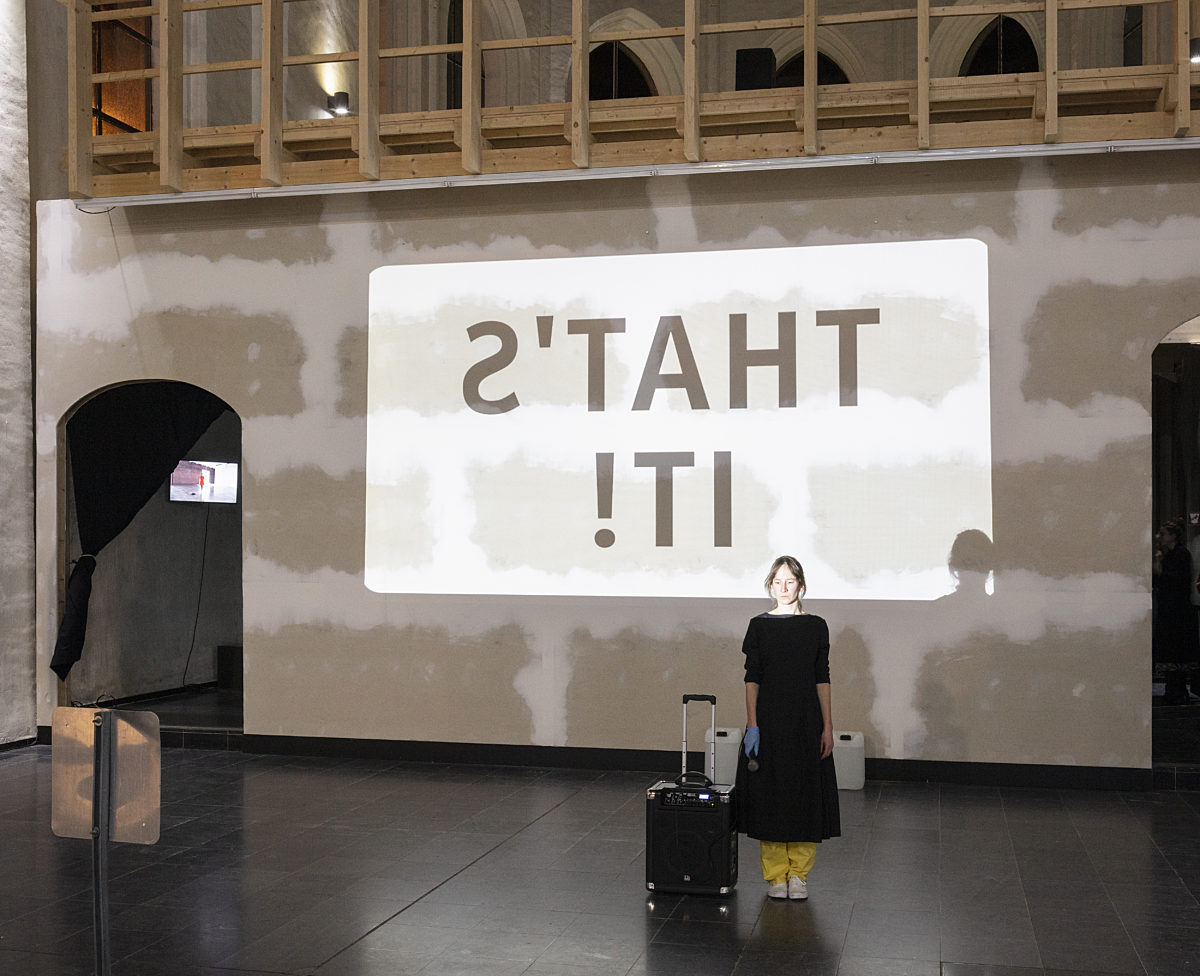 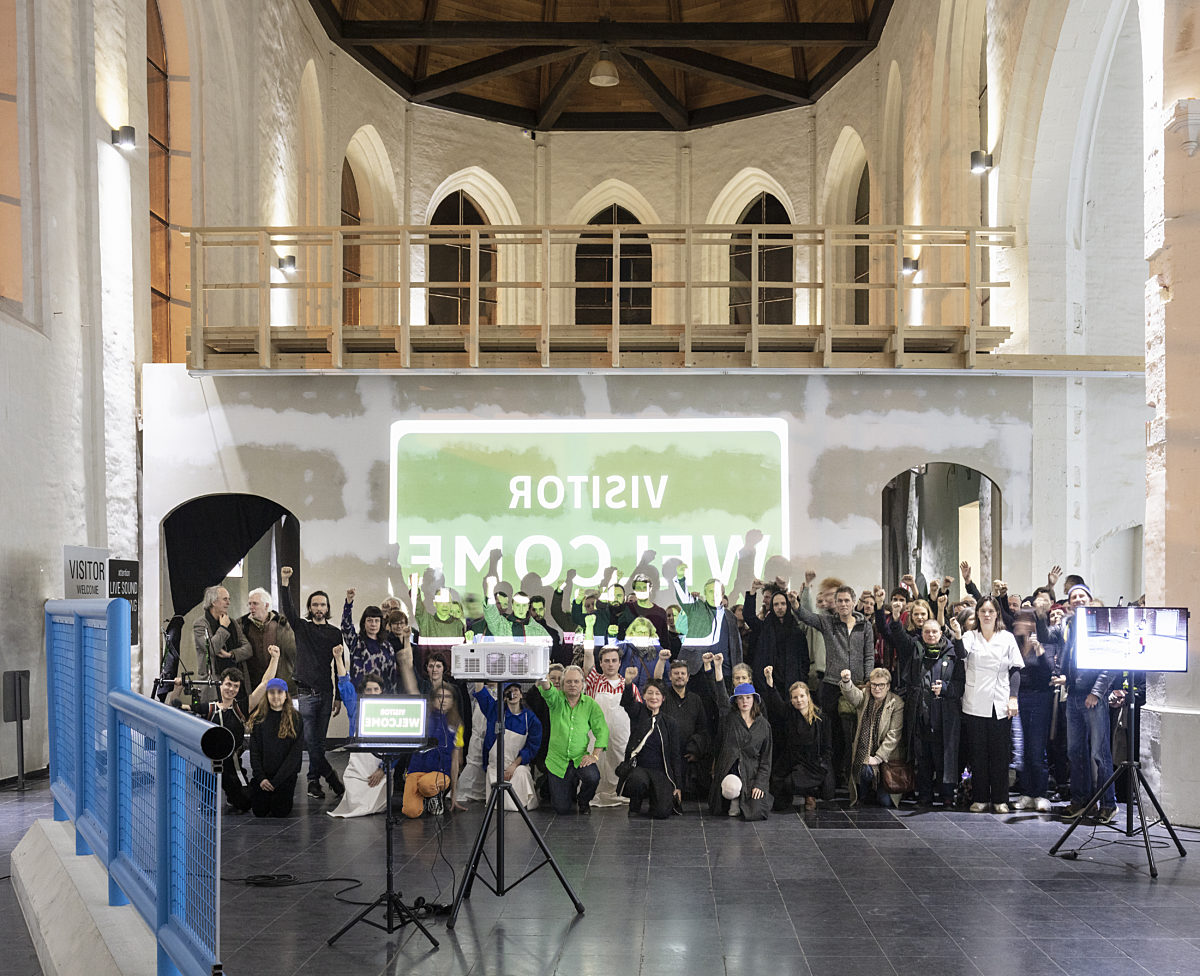