An exhibition consisting of 9 different screensavers 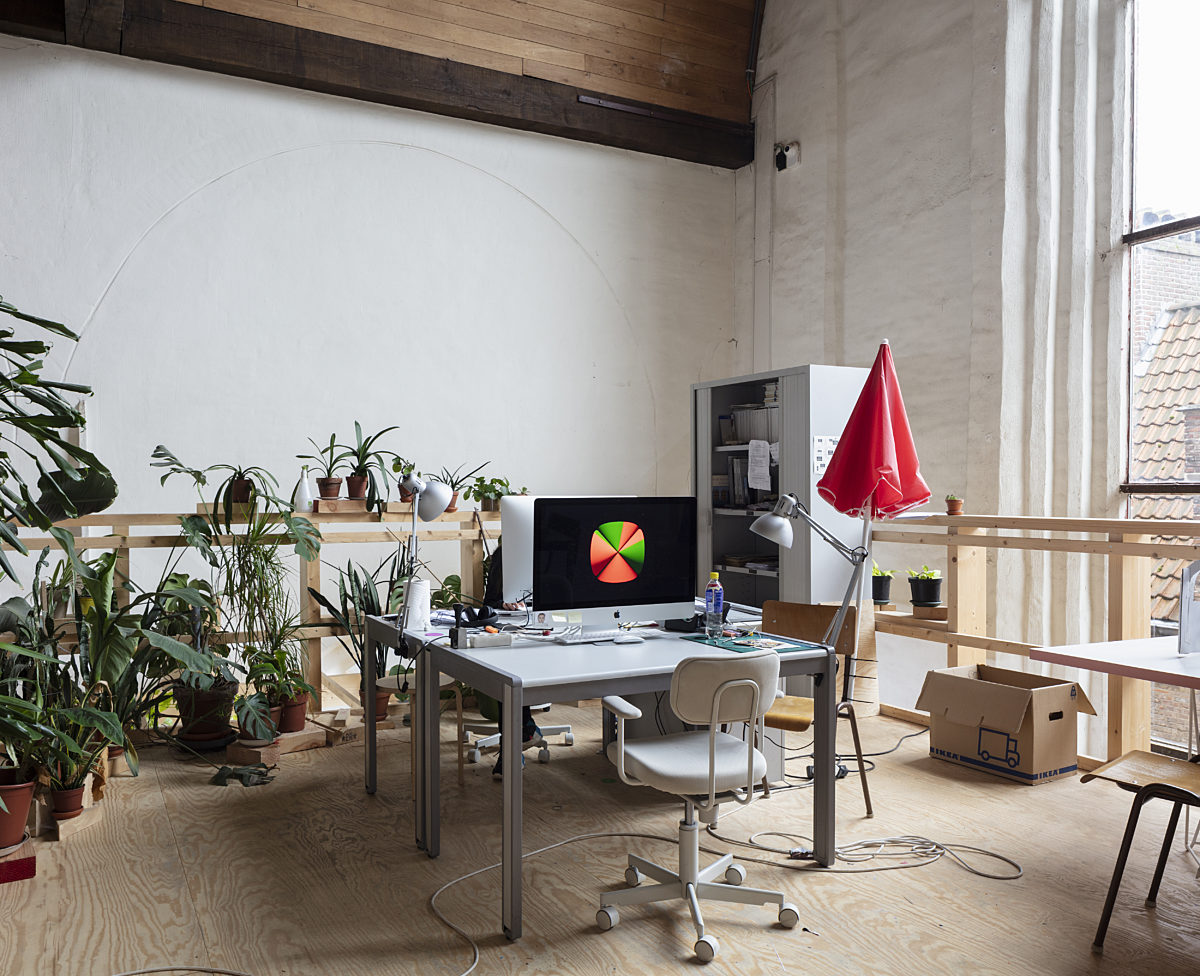 An exhibition consisting of 9 different screensavers installed on the personal computers of the Kunsthal Gent coordination team, volunteers and interns. On view at irregular hours and changing locations.

Given the most commonly used criteria of utility for software, it’s not surprising that the screensaver is a debased form. It does nothing, it says nothing and it takes you nowhere. Instead it offers a quiet, even ambient portrait of a system — a simple image, a complex algorithm, and an ever-changing picture of their interaction. Still there may be something to doing nothing. The computer, Alan Turing’s universal machine tirelessly capable of emulating the behavior of any other tool, is finally given a rest. After three minutes or so, the screensaver kicks in and the software produces a silently reconfiguring image of a system falling into and out of phase, automatically generating a fleeting picture of interference and coordination.

O-R-G is a small software company. O-R-G designs, programs, publishes, and sells apps, websites, screensavers, and other small chunks of code. O-R-G has made a few screensavers. The most recent is Tetracono designed by Bruno Munari, followed by Spiral Induction designed by Tauba Auerbach. Each of the previous has a long name: Three Times (in Blue and Yellow) by Karel Martens, Three Minutes of Doing Nothing, After His Beautiful Machine of 1855, Breaking Like Surf on a Shore Until, The Result of Collapsing Two Simultaneous Views, Al Gore Woke Up One Morning Wondering, Perhaps There is Something Left to Save.

Munari called it the Tetracono and its function was to show forms in the process of becoming. The art of the past has accustomed us to seeing nature as static: a sunset, a face, an apple - all static. People go to nature looking for images such as these static things, whereas an apple is in fact a moment /in the process from apple-/seed to tree, blossom, fruit.

Tetracono was created as an artist multiple designed for industrial production and published by Danese Milano. But only 10 were ever made. (An additional run of 100 was produced without motors.) Few sold, and by commercial accounts, the product was a flop. Perhaps it was just ahead of its time.

From a small black box to computer software, Tetracono is now available again.

The computer is already a hypnotic device. Staring at a fixed focal length, scrolling, and swiping all induce what hypnotherapist Daniel Ryan calls “subtle learning states.” And on the screen, what we repeatedly learn is a bent set of values including ravenous consumerism, preposterous ideas of hierarchy, race, gender, beauty, and spirituality. We consume these more deeply than we realize.

Hypnotists have used pendulums, repeating sounds, vanishing points, particular vocal cadences, and a variety of other means to produce a state of consciousness and brain activity marked by calm focus and extra sensitivity to suggestion. These tools facilitate what’s called “induction.”

Can we use the screen to hypnotize in a kinder way? To prompt specific eye movements, to pulse at certain rhythms, and invoke gestures that calm, or heal, or produce clarity of mind? In EMDR therapy, left-right eye movement has been used with restorative messaging to successfully treat post traumatic stress disorder. Extruding the spiral and making it breathe, this screensaver attempts a similarly benevolent induction.

Designed by Tauba Auerbach, commissioned by Kadist Art Foundation, and presented in coordination with an exhibition in San Francisco.

THREE TIMES (IN BLUE AND YELLOW) Dutch graphic designer Karel Martens has made clocks for years. Starting somewhere around 1968, Karel attached new faces to existing clock mechanisms to produce graphic compositions, which by their nature, are constantly changing. This screensaver works the same way.

Based on a wall clock designed by Karel for his exhibition at P! (New York), the screensaver software uses three yellow and blue spinning disks to display the hours, minutes, and seconds of the current time. It does very little, other than spin contentedly. But, on the way, the passing of time produces a collection of graphic arrangements as so many discrete moments.

Recently, it was suggested that Karel’s persistent interest in clocks was a symptom of working on his own for many years and that a clock might just be a symbol for “the long gestation period of independent ideas.”

THREE MINUTES OF DOING NOTHING

Three minutes of doing nothing, then everything goes black. In 1983, John Socha wrote the first screensaver software to preserve the image quality of computer displays. Published in Softtalk magazine in 1983 and named SCRNSAVE, the simple program turned the user’s screen to black after three minutes of inactivity (the time could be adjusted only by recompiling the program).

Personal computers were becoming affordable and popular, but their high-contrast green phosphor cathode-ray screens were subject to burn-in, where light intensity in one part of the screen left behind a permanent mark. SCRNSAVE was designed to eliminate these ghost-images and preserve the computer’s screen, coining the term and introducing a new software genre along the way.

AFTER HIS BEAUTIFUL MACHINE OF 1855

Two signals of varying frequency and phase result in a perpetual infinity, drawing and redrawing over and over. The familiar shapes are called Lissajous curves after mathematician Jules Antoine Lissajous and his “beautiful machine” of 1855.

Devised to draw a picture of two superimposed systems falling into and out of phase, the machine was constructed from a pair of tuning forks placed at right angles, each with a mirror attached. A light source is focused through a lens, bouncing off the first onto the second and projecting to a large screen. As the tuning forks are struck, simple vibrations move the mirrors in a regular oscillating pattern. The projected image forms the strange and beautiful curves of a Lissajous figure.

While living with William Burroughs at the Beat hotel on Gît-le-Coeur, Paris, and with the aid of Cambridge mathematician Ian Somerville, poet Brion Gysin designed a simple paper cylinder with periodic apertures surrounding a bare light bulb placed on a rotating turntable at 78 rpm.

The resulting flickering light repeats at a constant frequency between 8 and 13 Hz matching the brain’s alpha-waves present in deep relaxation, such as drifting into sleep. When a viewer closes their eyes, sits close to the machine, and the turntable is started, the flickering light induces waves of color and repeating geometric patterns that form and re-form in the mind’s eye. Ian Somerville described the experience in a letter to Gysin:

Visions start with a kaleidoscope of colors on a plane in front of the eyes and gradually become more complex and beautiful, breaking like surf on a shore until whole patterns of color are bounding to get in. After awhile the visions were permanently behind my eyelids and I was in the middle of the whole scene with limitless patterns being generated around me. Unlike a pharmacological trip, the experience ends when the user opens their eyelids. Gysin called his vision machine for closed eyes the Dreamachine.

In the liner notes for Ambient 1: Music for Airports (1978), Brian Eno lays out his strategy for an ambient music. He recounts being laid up in bed with a broken leg at his home when a visitor put a new record on the stereo for him to enjoy. She left with the volume of the stereo much too low, causing the music to merge with all of the other sounds in the room. Stranded in his bed and unable to adjust the volume, Eno began to enjoy the effect of such quiet music and realized that music could be made as a serious background — a carefully considered ambience meant to be largely ignored.

Ten years later, in an interview with PC Magazine, Brian Eno picked up the thread of an ambient composition. To his interviewer’s dismay, he claimed that the only useful quality of computers is their potential as semi-automated compositional systems. He confronted the interviewer, stating that “the only interesting thing about computers is screensaver software.” Software used to move large chunks of data around (such as video editing, page layout or even word processing) were all wrong — the transformative power of software was its ability to create real-time models that automatically generate endless variations.

Since his vice presidency, Gore has actively advocated The Trius Project — a satellite to be put into orbit around the Earth on a geosynchronous path (at position Lagrange 1) which would send back live images of both the whole Earth and the full Sun. This project was intended to feed a series of real-time displays, installed as screensavers on computers in U.S. public schools.

Al Gore woke up one morning wondering if it would be possible to beam a live continuous image of the full Earth back from space. And, would that image inspire people with the urgent need to care for our planet much as the 1972 Apollo 17 portrait of the whole Earth had crystallized the Ecology movement? According to NASA, this picture (better known as The Blue Marble) is the most widely distributed photograph in existence. The image offers a portrait of the Earth as a small, self-contained whole system floating alone in the infinite nothing of space.

PERHAPS THERE IS SOMETHING LEFT TO SAVE

Given the most commonly used criteria of utility for software, it’s not surprising that the screensaver is a debased form. It does nothing, it says nothing and it takes you nowhere. Instead it offers a quiet, even ambient portrait of a system — a simple image, a complex algorithm, and an ever-changing picture of their interaction.

Still there may be something to doing nothing. The computer, Alan Turing’s universal machine tirelessly capable of emulating the behavior of any other tool, is finally given a rest. After three minutes or so of nothing, the screensaver kicks in and the software produces a silently reconfiguring image of a system falling into and out of phase, automatically generating a fleeting picture of interference and coordination on your computer screen. Perhaps there is something left to save.

O-R-G is a small software company.* Screensavers for sale at www.o-r-g.com

Navid Nuur:
Apart from the secret that it holds 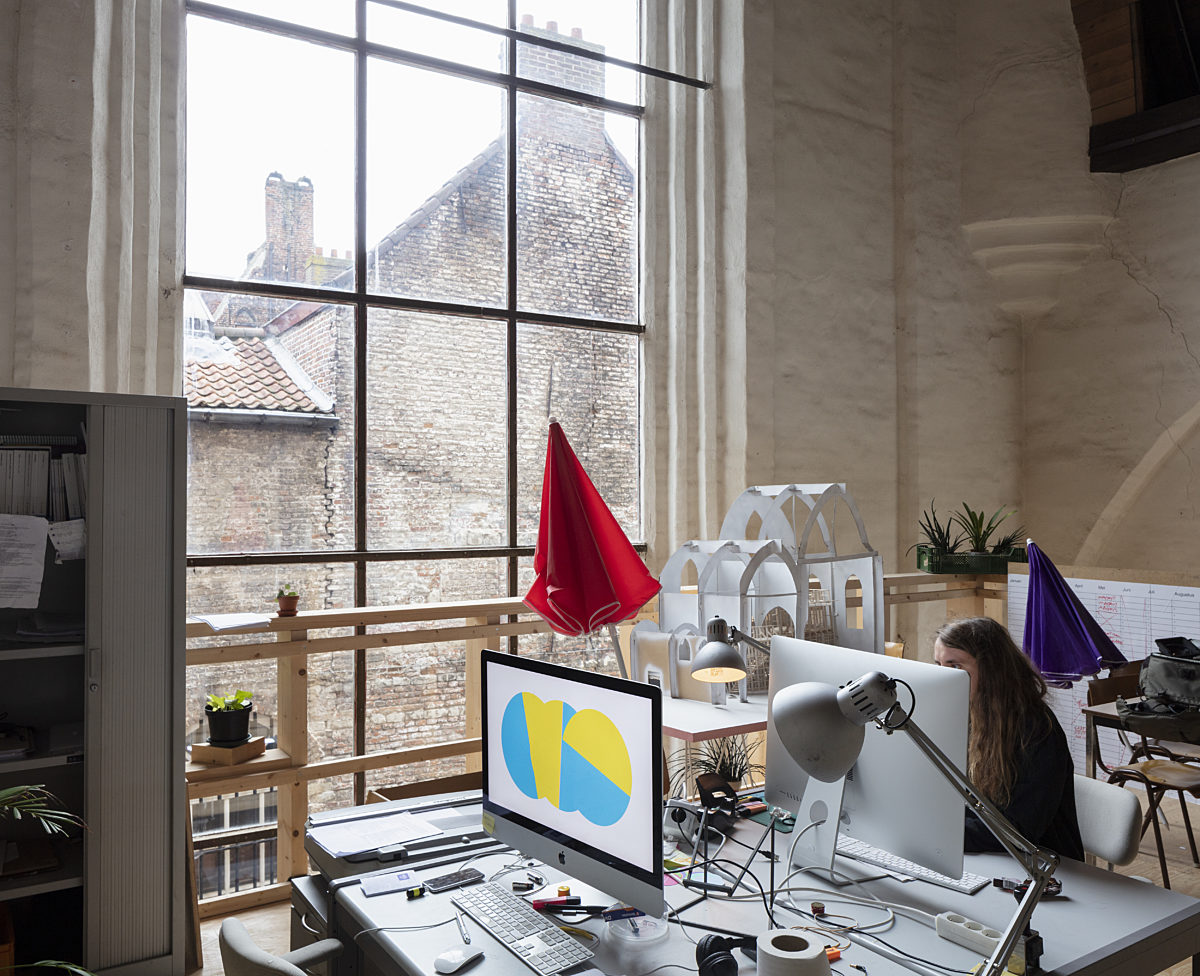